This year’s World Judo Championships in Baku is sure to be another outstanding advert for judo.

The GB Judo team will have to be on form in the Azerbaijan capital as they face a world-class field over the next eight days from Thursday 20 to Thursday 27 September.

14 GB judoka in total will be fighting over the next eight days in the individual and team competitions.

Two-time European medallist Ashley McKenzie (-60kg) gets things underway for GB Judo in a city where he has performed in the past, winning bronze at the Baku Grand Slam in 2016.

McKenzie has had a good run of form over the last 18 months with bronze medals at the Paris Grand Slam and European Judo Championships as well as three Grand Prix podium finishes.

He will face Bekir Ozlu (TUR) first up with the British judoka having lost a close fight to the Turkish judoka at The Hague Grand Prix last year.

Chelsie Giles (-52kg) is the first GB Judo debutant in action in Baku. The Coventry judoka has had a good first year at senior level with two Grand Prix medals in Antalya and Budapest.

At both competitions the 21 year old beat players ranked inside the top twenty in the world and will be confident of continuing that in Baku.

Giles have to take on the home crowd in her first fight as she faces Azerbaijan’s Buyankhishig Purevsuren in the first round.

Last year’s World bronze medallist Nekoda Smythe-Davis goes in as one of the top seeds at -57kg in Baku.

The Ealing Judo Club product continued her podium run after the 2017 World Judo Championships with three Grand Slam medals including gold in Dusseldorf earlier this year.

She will face the winner of Kaja Kajzer (SLO) and Julia Kowalczyk (POL) in the second round.

This day could be a very busy one for GB Judo with three judoka entered at -63kg and -81kg.

Amy Livesey finished seventh at last year’s World Judo Championships in Budapest as she backed up her seeding on her debut.

This year the SKK judoka will take on Meriem Bjaoui (TUN) in the first round before a second round contest against current Olympic champion Tina Trstenjak (SLO).

Alice Schlesinger has had success at European Judo Championships in the last two years with bronze in Warsaw (2017) and fifth in Tel Aviv (2018).

The three-time Olympian has Magdalena Krrsakova (AUT) first up with Martyna Trajdos (GER) lying in wait in the second round.

The 21 year old has had some solid results so far in his senior career including seventh at the Dusseldorf Grand Slam back in February.

He could take a big scalp early on as he faces current World Champion Alexander Wieczerzak (GER) in his first contest.

It could be another busy day with three more British fighters looking to make their mark in Baku.

Sally Conway (-70kg) has had a year to remember with five medals in as many competitions including Paris Grand Slam gold.

Conway is in great form and she will have Elvismar Rodriguez (VEN) in the second round, a judoka she beat at the Cancun Grand Prix last year.

Fellow -70kg judoka Gemma Howell has also had some great results in 2018 as she’s firmly established herself at her new weight.

Howell won bronze at the European Judo Championships in April, her first major championships medal of her career.

Her first round contest will be against Karene Agono Wora (GAB) with current World Champion Chizuru Arai lying in wait for the winner.

Max Stewart will be making his second appearance at a World Judo Championships following his debut in 2017.

The Birmingham judoka finished fifth in a world-class field at the Zagreb Grand Prix earlier this year. His first round contest is against Victor Ahiavor (GHA).

GB Judo’s second 2017 World medallist Natalie Powell goes in as one of the top four seeds at -78kg.

The Irfon judoka has had a solid 2018 including a third consecutive European bronze in Tel Aviv.

Powell goes straight into the second round where she’ll fight Sarah Myriam Mazouz of Gabon.

Jemima Yeats-Brown is making her Worlds debut in Baku and the dynamic Ryecroft judoka has made a good transition up from -70kg.

Yeats-Brown won bronze at the Saarbrucken Senior European Cup in July and followed that up with fifth at the Budapest Grand Prix.

Cuba’s world bronze medallist Kaliema Antomarchi is first up for the British fighter.

Sarah Adlington is the sole British judoka fighting on the final day of the individual competition.

The +78kg fighter from Edinburgh Judo Club has had some great results in the last 18 months including Grand Prix bronze in Cancun, Tashkent and The Hague.

Adlington will face Bangladesh’s Tahamina Aktar Lopa in her first contest of the day.

The final day of a long stretch in Baku sees the Mixed Team competition take over.

The GB Judo team has a bye into the second round where they will face either Russia or Kazakhstan.

Timings, streaming and other info

You can find the full draw on ippon.org and live.ijf.org. There will also be a live stream on live.ijf.org, britishjudo.org.uk and the Eurosport player.

There will be live and delayed broadcast coverage of the final block on Eurosport UK and final block coverage on each day on the BBC Sport website and Red Button.

For further info on broadcast/streaming of the 2018 World Judo Championships in the UK please check out this article. 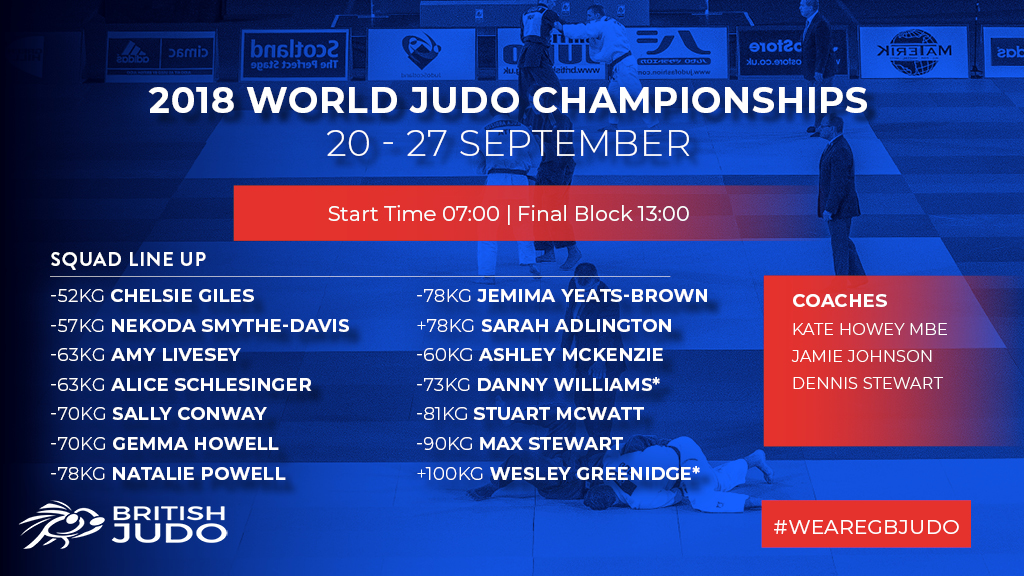 Third round exit for McKenzie at 2018 World Judo Championships Scroll to top
Select the fields to be shown. Others will be hidden. Drag and drop to rearrange the order.
Click outside to hide the compare bar
Compare