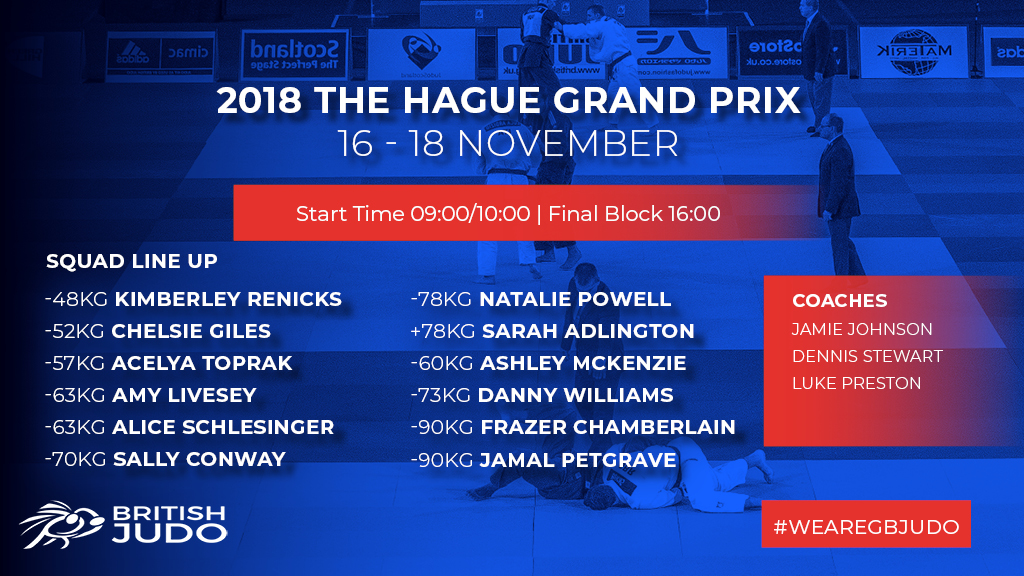 A 12 strong GB Judo Team will step on the mat in the Netherlands, at the latest qualifying event for the Tokyo 2020 Olympic Games.

All three judoka are back this weekend, looking to hit form ahead of the Guangzhou Masters in China next week.

Adlington goes in off the back of three consecutive fifth place finishes at the World Judo Championships in Baku and the Cancun and Tashkent Grand Prix.

Schlesinger has not yet medalled in 2018 with competition appearances few and far between. A fifth place at the European Judo Championships in Tel Aviv was a standout performance despite missing out on a medal.

Two-time Olympian McKenzie has enjoyed some of the best results of his career over the last 18 months including bronze medals at the Europeans in Tel Aviv and the Paris Grand Slam earlier this year.

He will be making his first competition appearance since the Worlds in Baku following a knee injury.

A bronze at the Abu Dhabi Grand Slam last time out keeps her in the running for a place at the Masters in December.

Another player in good form coming into this weekend is Frazer Chamberlain at -90kg. Chamberlain has finished fifth at his last two competitions in Cancun and Tashkent.

Fellow -90kg judoka Jamal Petgrave will also go into this weekend with confidence after winning silver at the U23 European Judo Championships in Gyor earlier this month.

Sally Conway (-70kg) and Natalie Powell (-78kg) have been GB Judo’s most successful athletes in 2018 in terms of number of medals won with five each.

Conway has medalled or placed in each of her seven appearances this year as the Rio 2016 bronze medallist appears to get better with age.

Amy Livesey joins Schlesinger at -63kg. The SKK judoka won her third Grand Prix in Cancun last month but was forced to withdraw from the Tashkent Grand Prix last week due to illness.

Glasgow 2014 champion Kim Renicks (-48kg) will be looking to get a good run of wins under her belt. Renicks has two fifth place finishes to her name in 2018 including at the Tbilisi Grand Prix.

Former Junior European silver medallist Acelya Toprak (-57kg) made her Grand Prix debut in Tbilisi back in March and the Metro judoka will want to make a strong impression as she moves into the senior ranks next year.

Danny Williams is the sole British judoka at -73kg and the experienced fighter will be looking to put himself in with a chance of challenging for silverware on Saturday.

Competition starts at 0900 UK time on each day with the final block at 1600 UK time each day.

Watch all of the judo live via live.ijf.org, where you can also find the draw.

Early exits in Odivelas and The Hague Scroll to top
Select the fields to be shown. Others will be hidden. Drag and drop to rearrange the order.
Click outside to hide the compare bar
Compare