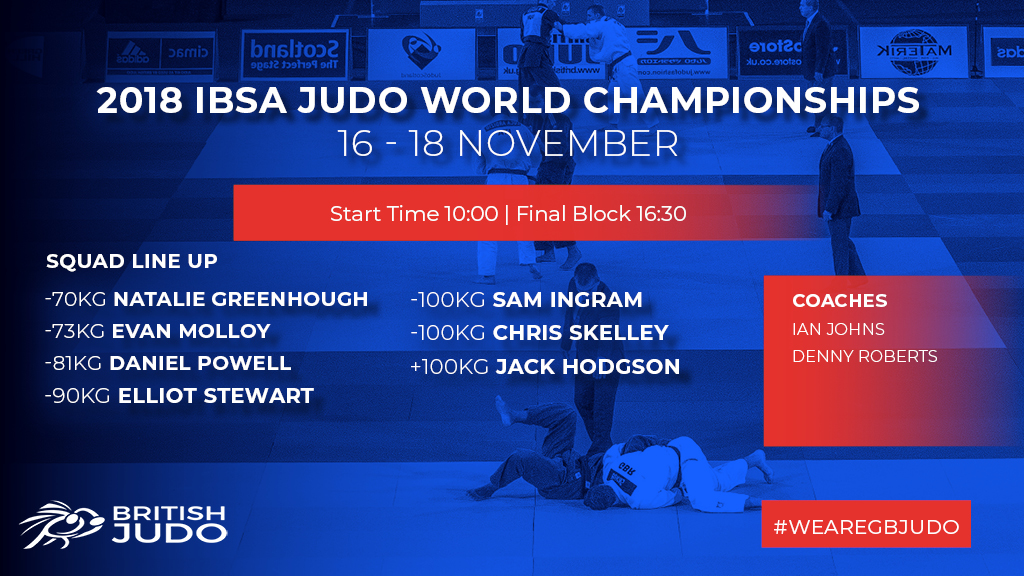 A seven strong GB Judo VI Team will step on the mat in Odivelas, in the first qualifying event for the Tokyo 2020 Paralympic Games.

-66kg judoka Connah Anders was selected initially but withdrew after suffering a concussion in training earlier this week.

Two members of the team will be making their World Championships debut this weekend in the form of Evan Molloy (-73kg) and Elliot Stewart (-90kg).

Devizes judoka Molloy is the youngest member of the team at 19 and he will be taking on a world-class field at -73kg including current Paralympic champion Ramil Gasimov (AZE) and the other Rio 2016 medallists.

Molloy finished seventh at last year’s IBSA Judo European Championships in Walsall and he will want to bring that form to the mat on Friday.

Stewart has made an impressive start to his VI Judo career since his debut at the IBSA Europeans last year.

The Birmingham judoka, whose father Dennis won bronze at the 1988 Seoul Olympics, has gone on to win bronze medals at the Tashkent and Antalya World Cups as well as a gold at the Brazil VI Grand Prix.

Along the way Stewart has beaten a number of the top judoka in his weight. However, the Worlds represents another step up with -90kg entry looking particularly strong with the likes of Rio silver medallist Oleksandr Nazarenko (UKR) and 2018 Asian Para-Games champion Vahid Nouri (IRI) entered.

Stewart fights on Saturday alongside five other members of the GB Judo VI Team including Natalie Greenhough (-70kg), the sole female representative on the team.

The Crawley judoka has medalled in 2018 though, winning silver and bronze respectively at the Brazil VI Grand Prix and VI German Open.

The top two from Rio 2016, Lenia Fabiola Ruvalcaba Alvarez (MEX) and Alana Martins (BRA), will be expected to challenge for gold in Odivelas.

London 2012 Paralympian Daniel Powell (-81kg) makes his first appearance at a major championships since those Paralympics six years ago.

Powell made his return to international VI competition at the start of 2018 with bronze medals at the VI German Open and Brazil VI Grand Prix.

One of the most exciting weight categories to watch this weekend will be the -100kg competition with two British judoka looking to medal on Saturday.

Sam Ingram and Chris Skelley are both among the top fighters in their weight and have the results to back it up.

Ingram is a two-time -90kg Paralympic medallist from Beijing and London but the Coventry judoka moved up a weight category following the Rio 2016 Paralympics.

He has already shown his class at the new weight with gold and silver at the Tashkent and Antalya IBSA Judo World Cups.

Skelley finished fifth at Rio 2016 on his Paralympic debut but has continued to improve in this cycle, being crowned IBS European champion last year. Silver medals at the Tashkent and Atyrau IBSA Judo World Cups.

Rio 2016 -90kg champion Zviad Gogotchuri (GEO) looks like the player to beat in Odivelas. The Georgian, who has five IJF Grand Slam and Grand Prix medals to his name, has moved up to -100kg but has already World Cup golds in Antalya and Atyrau.

As well as Gogotchuri, Abdula Kuramagomedov (RUS) and Choi (KOR) will be in the running for medals.

+100kg judoka Jack Hodgson has not had the perfect preparation to these World Championships, having had surgery on his elbow in the summer.

The Gainsborough fighter has picked up some of the biggest wins of his career in the last year, beating London 2012 champion Kento Masaki (JPN) in Tashkent and Rio 2016 silver medallist Wilians Araujo (BRA) at the 2018 VI German Open.

Competition starts at 1000 UK time on each day with the final block starting at 1630 UK time. There will be a full live stream including commentary via the IBSA Youtube Channel and a commentated stream on the IBSA Judo Facebook Page

GB Judo Preview: 2018 The Hague Grand Prix Scroll to top
Select the fields to be shown. Others will be hidden. Drag and drop to rearrange the order.
Click outside to hide the compare bar
Compare