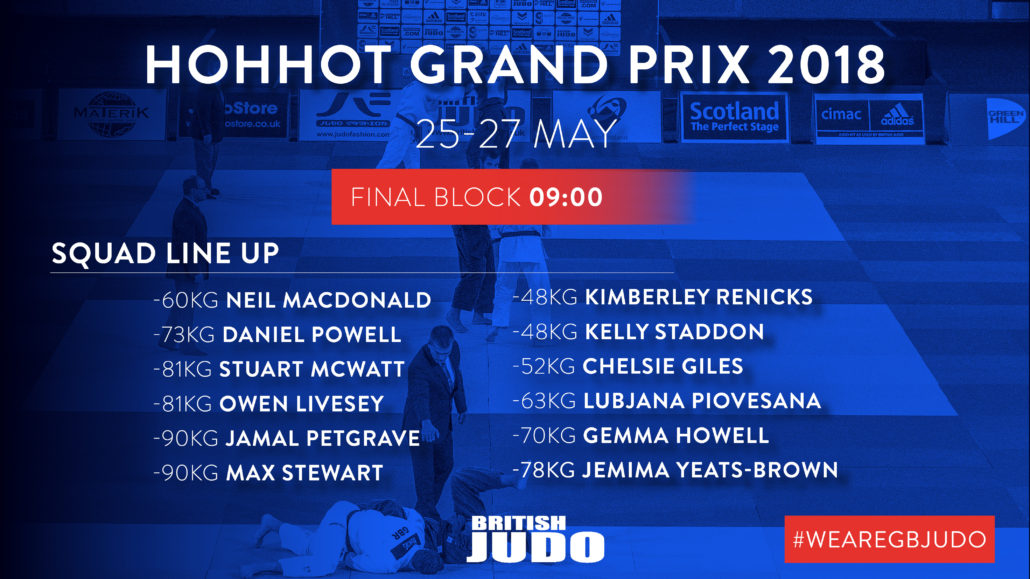 Tokyo 2020 Olympic qualification gets underway this weekend in China at Hohhot Grand Prix with a 12 strong GB Judo team taking to the mat from Friday 25 to Sunday 27 May.

The event in Hohhot marks the start of a two-year qualification process for the Olympics, which ends with the 2020 Baku Grand Slam.

It is a young British team with all bar three of the judoka under 25 years of age. Kimberley Renicks (-48kg) will get things started on Friday and the Scottish judoka will be looking to get back on form following two weeks of training in Japan

She takes on Israel’s Shira Rishony in the first round while fellow -48kg judoka Kelly Staddon faces Catharina Costa (POR). This will be the second time these two have fought this year with the Portuguese judoka winning a close fight at the Tbilisi Grand Prix.

Coventry judoka Chelsie Giles won her maiden Grand Prix medal last time out with silver in Antalya. Korea’s Da Sol Park will be her opponent in the first round at -52kg.

At -60kg Neil MacDonald will face Dutch judoka Tornike Tsjakadoea in the first round. This will be the fifth time these two have fought and the British fighter will be looking to get his first win over the former Junior European champion.

Lubjana Piovesana (-63kg) goes in as one of the top seeds following a bronze at the Tbilisi Grand Prix in March. She will have a bye into the second round where she’ll face Jing Tang (CHN) or Hye Sun Park (PRK).

At -70kg Gemma Howell will have a rematch of her European Championship quarter-final when she takes on Michaela Polleres (AUT) in the first round. This will be the third time these two have fought this year with Howell currently holding a 2 – 0 record over the Austrian.

Under-23 European medallist Dan Powell takes on WRL 18 Marcelo Contini in the first round at -73kg. This will be the Wolverhampton judoka’s third Grand Prix appearance of 2018.

At 81kg the duo of Owen Livesey and Stuart McWatt will be aiming to make an impression in a strong field. Both judoka have Chinese fighters first up with Livesey taking on Lasai Zha and McWatt facing Haiyuan Gao.

This will be Yeats-Brown first competition at -78kg and she faces Korea’s Yujin Park in the first round.

Petgrave faces Jesper Smink (NED) in the first round with the Westcroft fighter aiming to back up a strong seventh place finish at the Tbilisi Grand Prix in March.

Stewart is fighting in his first competition since the World Championships in Budapest and he faces Hebilige Bu (CHN) in the first round with a potential second round contest against the current Olympic champion Mashu Baker (JPN).

Final block will start at 0900 UK time each day and will bring you live updates via @BritishJudo on Twitter of any GB medal contests.

You can follow the draw on ippon.org during the prelims

Do You Want to Volunteer at the 2018 Veteran European Championships?

Changes to our Privacy Policy Scroll to top
Select the fields to be shown. Others will be hidden. Drag and drop to rearrange the order.
Click outside to hide the compare bar
Compare