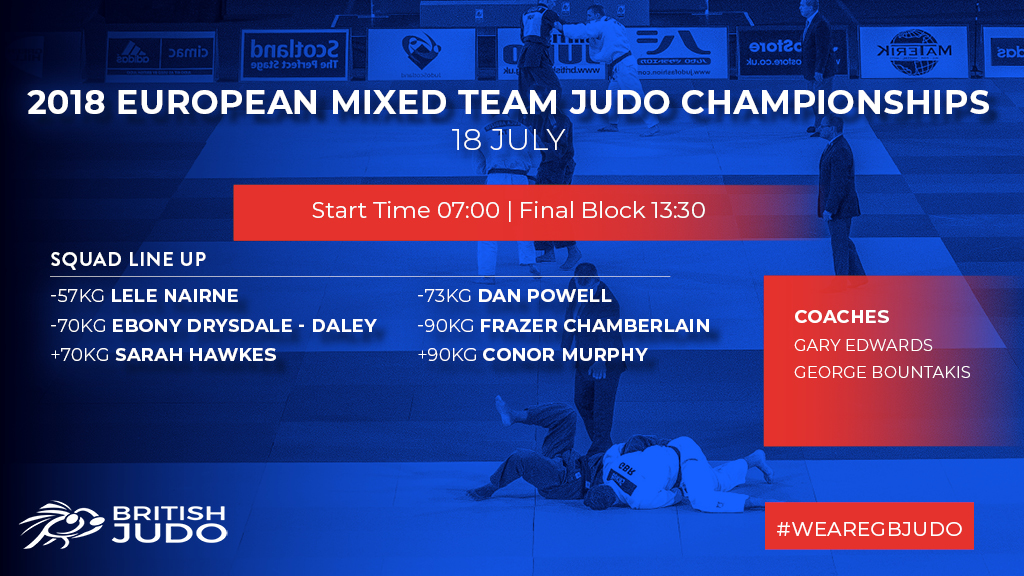 Ekaterinburg will play host to the 2018 Russian Copper Company European Mixed Team Judo Championships on Wednesday 18 July at the Palace of Sport DIVS.

A six strong GB Judo team will take the mat as 21 countries look to make their mark at the inaugural Mixed Team Europeans.

A number of other countries using this competition as an opportunity to blood younger athletes and the GB team is no different with all but one judoka making their first appearance at a senior European Championships.

Frazer Chamberlain (-90kg) is the only British fighter to have fought this level before with three previous European Championship appearances to his name. The Camberley judoka has had a solid 2018 including fifth at the Tunis Grand Prix in January.

At -57kg Lele Nairne won her first senior international medal earlier this year with bronze at the Orenburg Senior European Cup in May. The Bradley Stoke fighter will be making her debut having previously fought at the Junior European Championships in 2016.

-70kg judoka Ebony Drysdale-Daley has experience of winning big medals at Junior level, having won silver at the 2014 Junior World Championships in Fort Lauderdale. The Birmingham judoka has senior medals to her name including a silver at the 2016 Glasgow European Open.

Current British +78kg champion Sarah Hawkes will step on the mat in the +70kg category. The three-time British champion will be making a big step up with her previous highest level of competition being European Opens.

Dan Powell (-73kg) has plenty of experience fighting in European Championships with bronze at the 2017 U23 Europeans and team bronze at the 2017 Junior Europeans. Powell has made the step up to senior level in 2018 with a seventh at Sofia European Open and win over then WRL 18 Marcelo Contini at the Hohhot Grand Prix the highlights.

At +90kg Conor Murphy will be aiming to take the step up. Murphy has two British Championships bronze medals to his name at +100kg but this event will represent a big jump up on class for the Bath judoka.

Competition will start at 0700 UK time with live streaming via eju.net. Follow @BritishJudo for all the build-up and live updates on the GB team throughout the day. You can find the full draw on ippon.org

First round exit for GB Judo at European Mixed Team Judo Championships Scroll to top
Select the fields to be shown. Others will be hidden. Drag and drop to rearrange the order.
Click outside to hide the compare bar
Compare