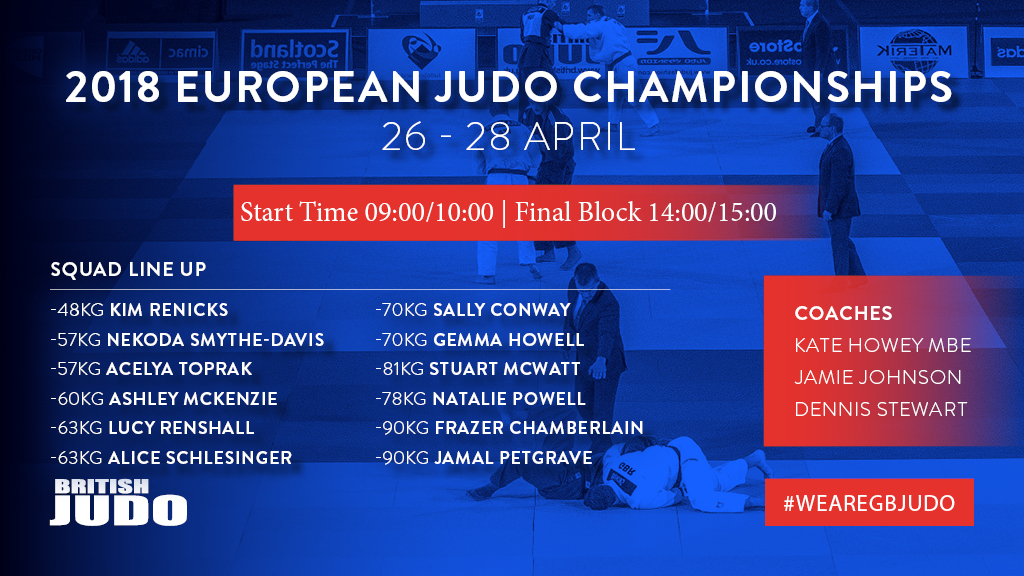 The first major championship of 2018 for GB Judo will get started tomorrow with the 2018 European Championships in Tel Aviv, Israel from Thursday 26 to Saturday 28 April.

GB Judo have medalled at the last two European Championships with bronze medals from Alice Schlesinger (2017), Natalie Powell (2016 and 2017) and Colin Oates (2016).

This week’s competition in Tel Aviv will also be the last world-ranking event for European judoka before the start of Olympic qualification at the Hohhot Grand Prix in May.

The 12 strong GB Judo team has a good blend of experience and youthful potential, with Olympic and World medallists stepping on the mat alongside debutants.

Thursday will see the first of those debutants in Acelya Toprak, the current Junior European silver medallist at -57kg.

Toprak has medalled at senior international level with gold at the Belgrade European Open but this will be only the third senior competition for Metro judoka.

Alongside her at -57kg will be World bronze medallist Nekoda Smythe-Davis who will go in as top seed in a high-class field.

The 25 year old has enjoyed a good start to 2018 with gold and bronze at the Dusseldorf and Paris Grand Slam’s respectively.

Toprak will face Slovakia’s Viktoria Majorosova in the first round while Smythe-Davis has the winner of Sarah Leonie Cysique (FRA) and Martina Lo Giudice (ITA).

Glasgow 2014 gold medallist Kim Renicks will be making her first appearance at a Europeans since 2013 following a year of consistent performances including fifth at the Cancun, Tunis and Georgia Grand Prix.

The -48kg judoka will face Catarina Costa (POR) in the first round with seventh seed Maryna Cherniak (UKR) lying in wait.

Ashley McKenzie (-60kg) has hit a consistent run of form since Rio 2016. The Camberley judoka has medalled or placed at all bar two events this cycle including bronze at the Paris Grand Slam in February.

The dynamic fighter has a bye into the second round and will face the winner of the first round contest between Tornike Tsjakadoea (NED) and Matjaz Trbovc (SLO).

Friday will be another busy one for GB Judo with five judoka in action including Rio 2016 bronze medallist Sally Conway.

Conway added a Paris Grand Slam gold to her collection this year and she will go in as one of the top seeds at -70kg with a potential quarter-final against World Masters bronze medallist Anna Bernholm (SWE) in store.

Before that though she’ll have to face either Gabriella Willems (BEL) or Alina Leingweiler (SUI) in the round of 16.

Joining Conway at -70kg will be Wolverhampton judoka Gemma Howell. The London 2012 Olympian has medalled at three Grand Prix since moving up a weight at the start of 2017, most recently at the Tunis Grand Prix in January.

Howell goes straight into the round of 16 and takes on eighth seed Aleksandra Samardzic (BIH) for a place in the quarter-finals.

Lucy Renshall will be making her Senior Europeans debut in Tel Aviv and will be seeded eight at -63kg following bronze at the Tbilisi Grand Prix last month.

The former U23 and Junior European champion will have to come through a world-class entry to be in with a chance of medalling. She will take on the winner of Busra Katipoglu (TUR) and Daria Davydova (RUS) for a place in the quarter-finals.

Alice Schlesinger will also be entered at -63kg in her first competition on Israeli soil since she started fighting for GB.

The 29 year old goes in unseeded and will face Stefania Adelina Dobre (ROU) in the first round.

The -81kg fighter has come back from two ACL/MCL surgeries over the last couple of years to put in some impressive performances including seventh at the Dusseldorf Grand Slam.

He will take on France’s Alpha Oumar Djalo in his first contest in a strong weight.

The Irfon judoka has been one of the top fighters at -78kg for a number of years and she goes into these Championships as the top seed.

Powell takes on Evelin Salanki (HUN) in the first round for a place in the last eight.

-90kg duo Frazer Chamberlain and Jamal Petgrave will be taking a world-class entry but both men will be confident of putting in a strong showing.

Chamberlain has had a solid start to 2018 with placings at the Tunis and Agadir Grand Prix, his best results to date at that level.

The Camberley judoka takes on Estonia’s Klen Kristofer Kaljulaid for a place in the round of 16 where he could face WRL 1 Aleksandr Kukolj (SRB).

Londoner Petgrave is the fourth and final GB debutant and the Junior European bronze medallist goes in off the back of a seventh place at the Tblisi Grand Prix.

He faces WRL 2 Beka Gviniashvili (GEO) in the first round.

All three days of judo will be live streamed via EJU.Net and you can follow @BritishJudo for live updates on the GB team. You call also follow British Judo on Instagram for behind the scenes content.

MSc Advanced Sport Coaching Practice At Sheffield Hallam Scroll to top
Select the fields to be shown. Others will be hidden. Drag and drop to rearrange the order.
Click outside to hide the compare bar
Compare