The latest stop on the IJF World Tour sees a six strong GB Judo team taking to the mat at the 2018 Ekaterinburg Grand Slam on Saturday 17 and Sunday 18 March.

It’s a young British team that will be looking to make their mark at Grand Slam level with an average age a shade under 21.

There’s an even split across both days of competition with the lightweights getting things underway on Saturday.

Kelly Staddon (-48kg) will be making her second appearance at Grand Slam level following her debut in Dusseldorf last month.

The Ford Judo Club judoka will take on Monica Ungureanu (ROU) in the first round. The Romanian is a two-time European medallist and is currently ranked WRL 29.

-73kg duo Eric Ham and Dan Powell are both making their Grand Slam debuts in Russia in a strong entry that includes Masashi Ebinuma (JPN) and Denis Iartcev (RUS).

Glossop’s Ham faces Armenia’s Ferdinand Karapetian in the first round. Karapetian recently medalled at the Dusseldorf Grand Slam and goes in as seventh seed.

Powell meanwhile will take on another seeded judoka in Ahmed El Meziati (MAR). The fifth seed finished just outside the medals at the Agadir Grand Prix last week.

Yeats-Brown has a Grand Slam medal to her name, winning bronze in Abu Dhabi back in 2016. The Ryecroft judoka took home gold at the Rome European Open last month.

Kazakhstan’s Zere Bektaskzy will be her first-round opponent

McWatt finished seventh at the Dusseldorf Grand Slam last month and faces Belgium’s Sami Chouchi in the first round.

Junior European bronze medallist Jamal Petgrave has a chance of making it into the quarter-finals in Russia. The Westcroft judoka will take on UAE’s Mihail Marchitan in the round of 16.

Competition starts at 0600 UK time on both days with a live stream via live.ijf.org. Check out the full draw on ippon.org and follow @BritishJudo on Twitter for updates throughout the competition 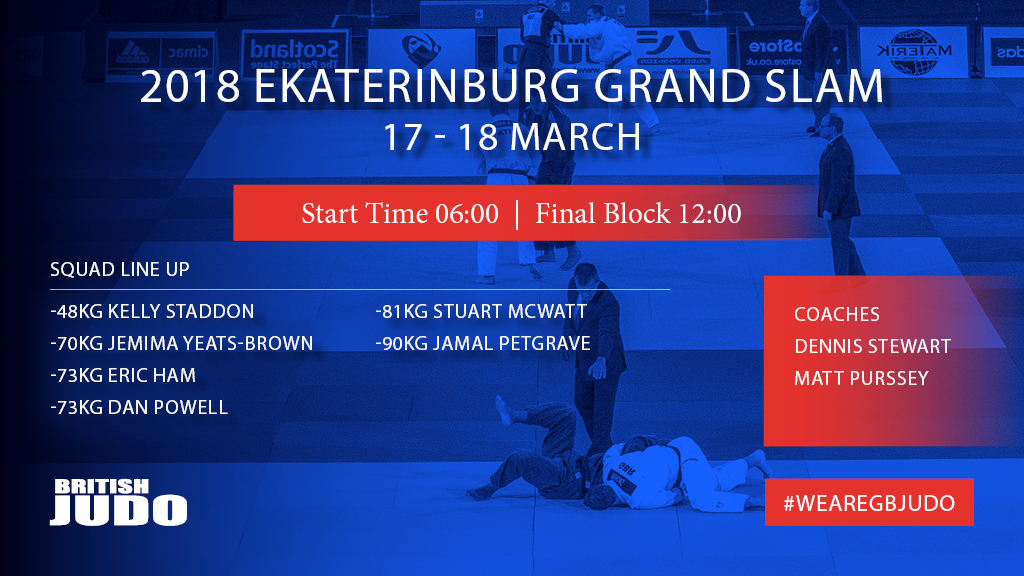 GB Judo Preview: 17 – 18 March 2018 Scroll to top
Select the fields to be shown. Others will be hidden. Drag and drop to rearrange the order.
Click outside to hide the compare bar
Compare