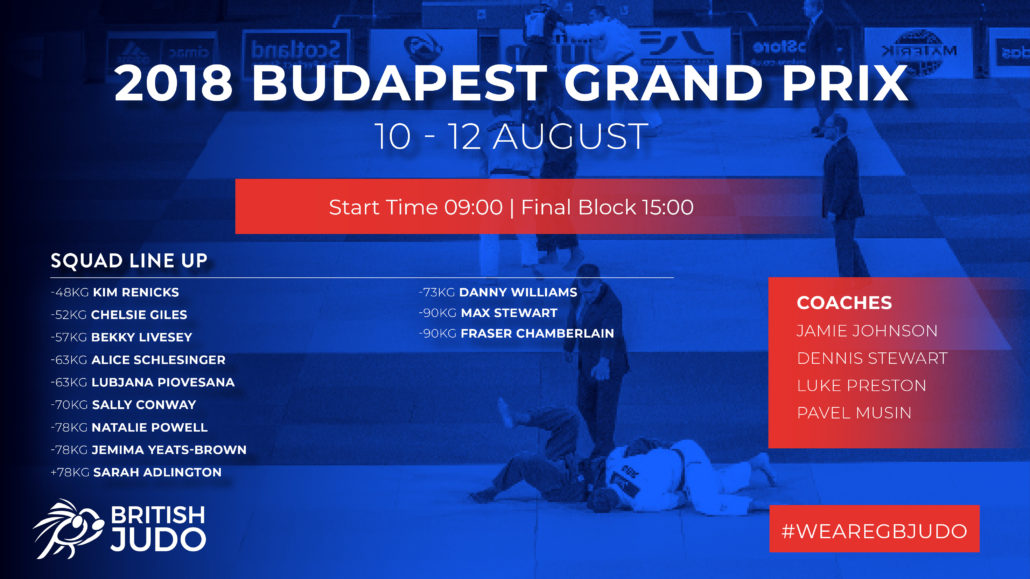 As the final weeks count down towards the 2018 World Championships, the GB squad head to Hungary to fine tune their preparations as they take to the mat at the Budapest Grand Prix.

A 12-strong GB squad will be looking to build momentum ahead of the World Championships due to be held next month (20th-27th September) in Baku as they look to better the two bronze medals achieved last time out in the form of Nekoda Smythe-Davis (-57kg) and Natalie Powell (-78kg).

It is a packed line up across the weight categories for the three days of competition and one which sees multiple World and Olympic Champions taking to the mat.

An all-female contingent will take to the mat on Friday in the hunt for medals with Kim Renicks (-48kg), Chelsie Giles (-52kg) and Bekky Livesey (-57kg) all making their Budapest bow.

Kim Renicks will be looking for her first podium finish at a Grand Prix after several near-misses in the past which have resulted in four Fifth placed finishes.

She will be taking on Hungary’s WRL No. 9 Eva Csernoviczki in the second round following a bye in the opening round for both judoka. Csernoviczki is the current Silver medallist in the category will provide a stern test for Renicks.

Chelsie Giles has begun to show some form on the mat lately with a seventh finish place in Zagreb two weeks ago demonstrating her potential to trouble the medal positions. She claimed her maiden Grand Prix medal earlier this year in Antalya with an impressive display of judo which fully deserved her silver medal.

Switzerland’s WRL No.13 Evelyne Tschopp awaits Giles in the opening round. The pair are yet to meet in competition but Tschopp has a solid resume of Grand Prix medals to her name with Gold in Agadir earlier this year.

SKK judoka Bekky Livesey will be making just her third appearance on mat in 2018. She was eliminated in the opening round in Zagreb so will be hoping for more mat time this weekend.

She will again lock horns with Bulgaria’s Ivelina Ilieva in the second round after both received a bye in the opening round. Ilieva eliminated Livesey in the opening round of the Zagreb Grand Prix just a couple of weeks ago, so Livesey will be out to avenge that defeat when she steps onto the mat tomorrow.

Rio 2016 bronze medallist and Paris Grand Slam Champion Sally Conway (-70kg) has been in terrific form in 2018, picking up four medals along the way including silver in the European Championships, which has seen her enter the World’s Top 10.

Conway will come up against Australia’s Aoife Coughlan in the opening round. Coughlan is the current Oceania Gold medallist so Conway will not have it easy in first contest on the mat in Budapest.

Alice Schlesinger has had an injury-hit 2018 which has seen withdrawals from a number of events is joined in the -63kg category by Lubjana Piovesana. Schlesinger will be making her first appearance after a seventh placed finish in the European Championships back in April.

Piovesana is well accustomed to Grand Prix competition with three bronze medals to her name with her previous podium finish coming at the Tblilisi Grand Prix in March.

The -63kg category looks to be a difficult competition with World No.2 Tina Trstenjak (SLO) entering as top seed.

Schlesinger has to wait to find out her opponent following a bye in the opening round. She will face the winner of the 1st round contest between Austria’s Tina Zeltner and Serbia’s Svetlana Dakic. Piovesana, on the other hand, faces a difficult test in her opening contest as she comes up against Austria’s World No.10 Magdalena Krssakova. The pair have met once before in competition back in 2017 at the Oberwart European Open with Krssakova coming out on top.

Danny Williams returns to Grand Prix competition this weekend to compete in his third event of the year as he enters the -73kg competition.

Williams has been drawn against Russia’s Oleg Babgoev and will fancy his chances to progressing through the opening rounds.

Natalie Powell and Jemima Yeats-Brown look set to challenge the best in the World as they enter the -78kg competition. Powell finds herself as the top seeded judoka in the category and it is not hard to understand why. The Zagreb Grand Prix last month was the first competition from her last 10 that she has failed to place at. The former WRL 1 has had a solid year to date with three bronze medals including a third European Championship medal.

Also at -78kg is Jemima Yeats–Brown in the Ryecroft judoka’s fourth competition at this weight. The former Junior World medallist won bronze at the Saarbrucken Senior European Cup last time out.

Powell will enter the competition at the second round stage following a bye in the opening round. She will take on the winner between Australia’s Melanie Wallis or Cameroon’s Audrey Njapa Njepang. Yeats-Brown has been drawn into a tricky pool which could see her take on Gussje Steenhuis if she wins her first two contests. Russia’s WRL 25 Antonina Shmeleva stands in her way in the opening round first however.

Sarah Adlington (+78kg) is being funded for this event by GB Judo to assist with her preparations for the World Championships next month. She has made a solid start to qualification with silver at the Madrid European Open at the start of June. She ended 2017 strongly with two bronze medals at The Hague and Tashkent Grand Prix respectively.

Yanan Jiang (CHN) will be Adlington’s opening round opponent. It will be the first time that Jiang has competed in a Grand Prix competition outside of Asia.

At -90kg Max Stewart made his return from injury at the Hohhot Grand Prix in May following a lengthy lay-out from the sport, before securing a fifth placed finish in Zagreb last month.

Stewart will take on German judoka Marc Odenthal in the first round.

Frazer Chamberlain will be looking to fight his way back into the medal positions as he joins Stewart in the -90kg category. Chamberlain made a strong start to 2018 with fifth and seventh place finishes at the Tunis and Agadir Grand Prix.

Chamberlain has been drawn against Spain’s Lorenzo Nacimiento in the opening round.

Competitions starts at 0900 UK time on all competition days.

Pre-Sale Tickets Now Available for the 2018 British Judo Awards Evening Scroll to top
Select the fields to be shown. Others will be hidden. Drag and drop to rearrange the order.
Click outside to hide the compare bar
Compare