GB Judo will be back in action this weekend for the 2018 Antalya Grand Prix from Friday 6 to Sunday 8 April.

Nine British judoka will be fighting this weekend including three who will be using this event as their final bit of preparation for the European Championships in Tel Aviv later this month.

Kim Renicks (-48kg), Sally Conway (-70kg) and Natalie Powell (-78kg) will be looking to get some wins under their belt before stepping on the mat in Israel.

Renicks has been consistent over the last year with fifth places at the Cancun, Tunis and Tbilisi Grand Prix moving her up to WRL 31. She will face Fjolla Kelmendi (KOS) first up

Rio 2016 bronze medallist Sally Conway hasn’t fought since winning the Paris Grand Slam in February but a strong performance in Antalya should all but secure a seeding for the Europeans later this month.

Conway will take on Montenegro’s Jovanna Pekovic in her first fight of the day.

She will face the winner of Sidika Isik (TUR) and Loriana Kuka (KOS).

Piovesana will take on Alexia Castilhos (BRA) in the second round in her first fight of the day.

Chelsie Giles has achieved three seventh place finishes at Grand Prix so far in her career, most recently in Tunis back in January. She will be aiming to improve on that in Antalya this weekend. Giles will face either Daria Bobrikova (RUS) or Madelene Rubinstein (NOR) in her first contest.

Alex Paske (-73kg) has picked up some serious air miles in the last month after fighting in three Pan American Opens including a fifth place in Buenos Aires. The Team Bath judoka takes on Ion Nacu (ROU) in his first round contest.

Camberley duo Danny Williams (-73kg) and Owen Livesey (-81kg) will also be in action this weekend. Williams finished seventh at the Agadir Grand Prix last month and he will be aiming to back that up in Turkey.

Livesey last placed at a Grand Prix back in Cancun last year. He will be aiming to come through a strong -81kg field.

They will take on Jeferson Santos Junior (BRA) and Srdjan Mrvaljevic (MON) respectively in their first contests of the day.

Competition starts at 0830 UK time on each day with live coverage via live.ijf.org. You can find the full draw on ippon.org and follow @BritishJudo on Twitter for live updates throughout the weekend 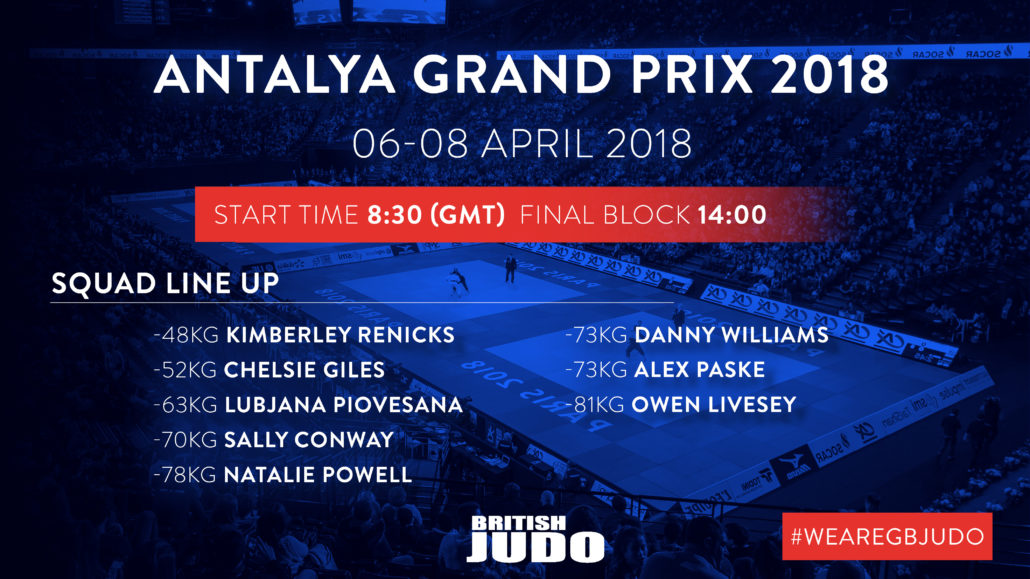 Henshaws Specialist College Students Gain Red Belts Scroll to top
Select the fields to be shown. Others will be hidden. Drag and drop to rearrange the order.
Click outside to hide the compare bar
Compare