GB judoka came away with four medals on day two of the 2017 Cancun Grand Prix on Saturday 17 June including a silver for Olympic bronze medallist Sally Conway.

This was the Rio Oympian’s second competition back since the Games last summer and she followed up her silver in Bucharest two weeks ago with another strong display.

The -70kg judoka made short work of Dunia Santo (HON) in her first round contest as she followed up a nice bit of ashi-waza with some strong newaza as she applied Ude-Gatame (arm lock) and forced Santo to tap. 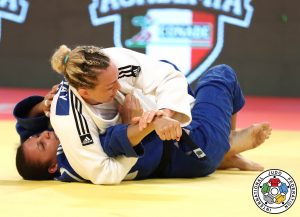 Conway gets the win in her opening contest

Conway’s trademark newaza skills were to the fore in her quarter-final against Sara Rodriguez (ESP). The Spanish judoka is a former Junior European championship medallist but she had no answer to Conway’s judo as she was held down for ippon. The British judoka followed this up with arguably her best performance of the day against World No.1 Elvismar Rodriguez (IJF).

The Venezuelan struggled to match Conway’s all-round judo but did well to take things into golden score. However, Conway was finally to get the decisive waza-ari score 58 seconds into golden score and booked her spot in the final. 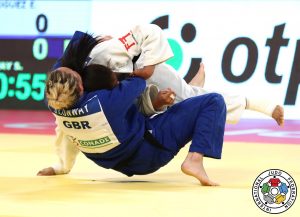 Conway throws Rodriguez for waza-ari in the -70kg semi-final

There she faced long-time rival Maria Bernabeu (ESP) with Conway leading their head to head 4-2. The Spanish judoka had looked strong throughout the day and it proved to be the same in the final. Conway had an early chance in newaza stopped early and after that Bernabeu took control. She went ahead by waza-ari not long after and forced Conway on the defensive with her strength and gripping.

The British judoka was forced to pick up three shidos and missed out on her first Grand Prix gold since Jeju in 2015. However, she was pleased with how her day went:

“It feels great to be back competing at this level. I am happy with how I fought today and looking forward to a few days in the sun. Then it’s back to training for the Worlds in September”

There was also a silver medal for Amy Livesey (-63kg) as she followed up her Yekaterinburg Grand Slam bronze last month with her second Grand Prix medal. The British judoka went in as second seed and she backed up her ranking.

Home judoka Elizabeth Garcia was first up and Livesey controlled large parts of their contest but it took a late waza-ari score, using her ura-nage, to secure the win.

Anriquelis Barrios (IJF) was next up and it was a tough, physical encounter with neither judoka able to take complete control. With little over a minute to go however Livesey transition well to apply shime-waza (strangle) and forced Barrios to tap. 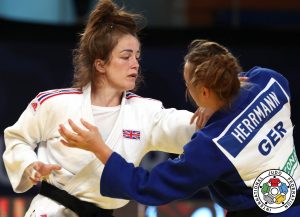 Livesey was too strong for Herrmann in the -63kg semi-final

The St Helens judoka’s improving newaza skills were once again called to action in her semi-final with Vivian Herrmann (GER). Livesey was once again able to apply shime-waza, this time inside the opening minute with Herrmann tapping out after some resistance.

Brazil’s Ketleyn Quadros was next up in the gold medal contest. The Brazilian had won their one previous encounter in Dusseldorf and once against Quadros came out on top throwing Livesey for ippon with just under two minutes left.

“I had a slow start today and got better as the day went on. I’m pleased to get a medal in my last competition before the Worlds.”

There were also bronze medals for Lubjana Piovesana (-63kg) and Gemma Howell (-70kg). This was Piovesana’s second Grand Prix medal, following on from her bronze in Antalya in April, and was an impressive showing from a still Junior athlete.

Piovesana’s newaza skills were too good for Mexico’s Sofia Arevalo in the first round as she took advantage of a poor attack to apply shime-waza and force the tap. Quadros was next up in the quarter-finals and the experienced Brazilian was just too strong and forced the British judoka to pick up three shidos, dropping Piovesana into the repechage.

There the Birmingham judoka made short work of Spain’s Cristina Cabana Perez throwing her for ippon inside the first 20 seconds. The score was initially given as waza-ari but upgraded by the Commission.

The 20 year old is pleased with how her judo is progressing:

“I am very happy with my medal and performance today. This showed some good progression into senior judo.”

Wolverhampton’s Gemma Howell made it four medals in four world ranking competitions since moving up to -70kg. The London 2012 Olympian has proven to be a tough customer at her new weight and ground out some tough wins.

Against Lea Pueschel (GER) in the opening round Howell went ahead by waza-ari early on and showed good contest management to see out the fight. In the quarters against Amanda Oliveira (BRA) Howell took the lead late on. Again, though she showed her contest management to hold off a late surge by the Brazilian and booked her spot in the semi-finals.

Maria Bernabeu was another step up for the British judoka but she made it tough for the Spanish judoka, losing out by just a waza-ari in the end.

In the bronze medal match against Barbara Timo (BRA) Howell finally got to show her newaza skills as she transitioned well from an attack into osaekomi. From there she showed impressive strength to hold down the Brazilian despite being in an awkward position.

“I’m really happy to get my second Grand Prix medal at my new weight category. Hopefully this means I will get selected for the World Championships and I can keep this run going”

There were also seventh place finishes for Patrick Dawson (-73kg) and Owen Livesey (-81kg). Both men made strong starts to the day with wins over Sergio Mattey (IJF) and Elemer Szocs (ROU) respectively. Dawson however lost out to Spain’s Javier Ramirez in the quarter-finals by waza-ari while Livesey couldn’t get the better of Attila Ungvari in his quarter.

Both men went on to lose close repechage finals with Livesey involved in a lung-bursting contest with Jack Hatton (USA). It was a close fight with decisions that could have gone either way. In the end though it was Livesey who lost on shidos in golden score. Dawson gave home judoka Eduardo Araujo a close fight as well but the Mexican scored two waza-aris to win.

Jack Smith (-73kg) made his Grand Prix debut but was unable to get past Alexander Turner (USA), being thrown for ippon in the second half of their contest.

“I’m really pleased as four our of four women medalled today and this shows the depth we have in these weights right now. It was a good run out for some before the World Championships and highlighted a few things to work on in the next couple of months.”

Natalie Powell (-78kg), Sarah Adlington (+78kg), Ben Fletcher (-100kg) and Phil Awiti-Alcaraz (-100kg) will be in action on the final day of the Cancun Grand Prix. The judo starts at 5PM UK Time and will live via ippon.tv and you can follow @BritishJudo on Twitter for updates

Four more medals added to GB Judo tally at Cancun Grand Prix Scroll to top
Select the fields to be shown. Others will be hidden. Drag and drop to rearrange the order.
Click outside to hide the compare bar
Compare