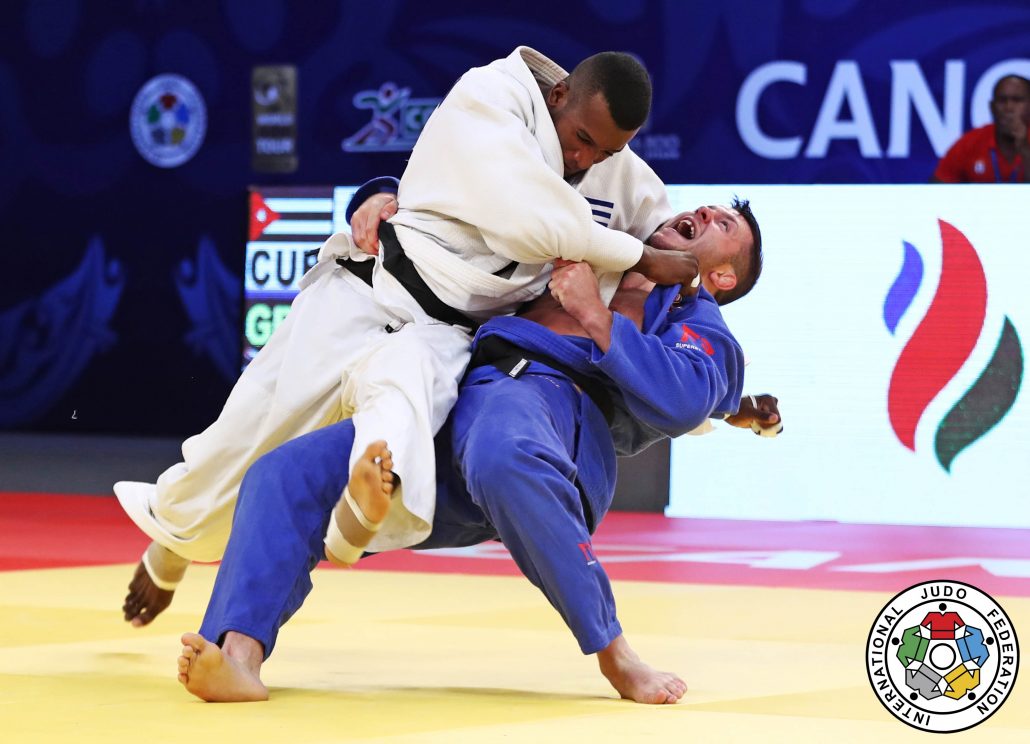 It was another medal packed day for GB Judo with another four to add to the tally at the Cancun Grand Prix on Sunday 18 June.

Ben Fletcher was arguably the standout performer with his silver medal his first at a Grand Prix since Ulaanbaatar almost two years ago.

The Bath judoka showed his class early on as he was too good for L A Smith III (USA) in his opening contests. Fletcher rarely looked troubled as he won by two waza-ari scores. Next up was Cuba’s Andy Granda and neither fighter was able to dominate the contest. Fletcher forced Granda to pick up two shidos in regulation time but the contest went to golden score. 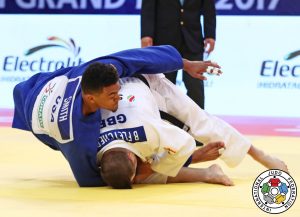 Fletcher was too strong for Smith III in his opening contest

In the end the British judoka’s greater positivity told with Granda picking up a third and final shido to end the contest.

Granda’s countryman Jose Armenteros (CUB) was next up with both men having beaten each other in past. Armenteros is a former World silver medallist and it was another close contest. With just under two minutes left Fletcher was able to throw Armenteros for waza-ari and in doing so the Cuban picked up an injury. Armenteros was forced to tap out, which gave Fletcher the win and a spot in the final.

There he faced Peter Paltchik (ISR) for gold with the Israeli having won each of his contests that day pretty decisively. It was an excellent contest with both judoka looking to attack. Fletcher was close to scoring on a couple of occasions but it was Paltchik who took the win with a late waza-ari score off a drop seoi-nage.

He was joined on the medal rostrum at -100kg by Philip Awiti-Alcaraz. The Enfield judoka was fighting in his first international competition since the Qingdao Grand Prix in November and he made short work of Jacob Andrews (USA) in his first contest.

The American judoka had no answer to Awiti-Alcaraz’s strength and gripping which forced Andrews to pick up three shidos. The British judoka then took on Paltchik who was in great form. The Israeli was just too good for Awiti-Alcaraz on this occasion, twice scoring waza-ari before finishing in osaekomi.

Awiti-Alcaraz came back well in the repechage however and saw off the challenge of Thomas Briceno (CHI). The Chilean made a strong start almost throwing Awiti-Alcaraz inside the opening minute. The British fighter responded well though and threw his opponent for waza-ari and held him down for ippon. 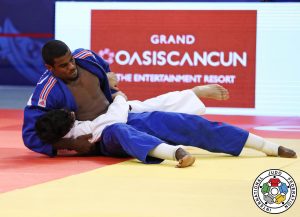 Awiti-Alcaraz secures the hold down in his repechage contest

Armenteros’s injury meant that he could not come out for the bronze medal contest which ensured Awiti-Alcaraz would pick up his second Grand Prix medal.

Natalie Powell (-78kg) picked up the 15th Grand Prix medal of her career with silver in Cancun. In a smaller field Powell went straight into the semi-finals where she was too good for Karen Leon (IJF) throwing her force waza-ari and going straight into the hold down. 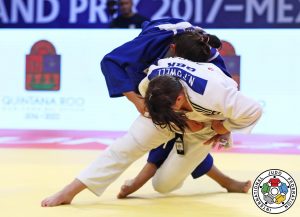 She took on Brazil’s double Olympic bronze medallist Mayra Aguiar for gold with the two judoka having only met once so far. Aguiar won on that occasion and she made it two from two in Cancun as she used her strength to good effect. She was able to catch Powell off balance and threw her for ippon leaving the British judoka with silver, her third medal in a row.

Despite the defeat Powell was happy with her day’s work including picking up some key learnings on a rival:

“The day secured me a top eight seeding for the Worlds which was the main aim of the competition for me. It was also good to fight Aguiar. I’ve not had many opportunities to fight her so it was good to see where I am against her.

“I came away with some information, which I can work on in the lead-up to the Worlds.”

Sarah Adlington (+78kg) ensured it was a clean sweep of medals for GB on the final day of the tournament. Adlington hadn’t fought in international competition in over a year and took on Croatia’s Ivana Sutalo first up. Sutalo however pulled off one of the biggest throws of the day to win the contest which dropped Adlington into the bronze medal contest.

There she was scheduled to face Brazil’s Rochele Nunes but the Brazilian had picked up an injury and was unable to step on the mat leaving Adlington to pick up her first Grand Prix medal since 2014.

This result meant that GB Judo finished with nine medals (four silver and five bronze) in total at the Cancun Grand Prix, the most out of any nation. Medals were also won by some of the experienced judoka and those still looking to make their mark on the world rankings.

Elite Performance Coach Kate Howey MBE was pleased with the performance of GB Judo ahead of the World Championships in Hungary:

“Overall we have had a good tournament and have come away with nine medals which is pretty impressive from a Grand Prix. We now have to get back into training and finish preparation for the World Championships at the end of August.”

12 medal haul for GB Masters in Zagreb Scroll to top
Select the fields to be shown. Others will be hidden. Drag and drop to rearrange the order.
Click outside to hide the compare bar
Compare