At the tail end of 1980, in New York City, Madison Square Garden Indoor Arena, on November 29-30 a momentous event in the world of Judo took place: the first Women’s World Judo Championships. This week we will be catching up with each representative from the British squad that year, starting with Dawn Netherwood.

The Championship kicked-off on the Saturday afternoon at 3.00 pm, for the Elimination and Repechage for the -61 Kg, -66 kg, -72 kg, and +72 kg categories.  The Draw had Dawn Netherwood into action first.

Dawn was only 20 years old and had good form leading into her selection for the GBR Team. Her most prestigious achievements of Silver medals at the two previous European Championships: two years earlier in Cologne at -56kg when she was aged 18, and another at -61kg when 19, provided Roy Inman with evidence that she was a winner at the top echelon of women’s judo.  But Roy was a master tactician, as will be described elsewhere in this series of articles, and his team had relative strength and depth, and he made some radical weight category changes across the whole of the team for this competition.

He made the rather unusual decision to place Dawn in the heavier -66kg category, rather than her normal -61kg at that time.  Dawn was superb on her feet – a strong thrower – aggressive attacker – and took on her initial opponents with apparent ease.  She polished off Sue McDonald of Australia in 1 minute 58 seconds with a superb Muni-gatame for Ippon.

In the next round, she demolished the highly fancied Marie France-Mil of Belgium in just under 29 seconds with a series of techniques, straight from the outset, gaining a Yuko from a tai-toshi. This then progressed into a Kesa-gatame, from which the Belgian escaped, only for Dawn to employ her renowned skill in jugi-gatame for Ippon – and, I repeat – this was all done and dusted within 29 seconds! What a start… and the whole British team were in uproar, which was to become the norm for all bouts where a Brit was in competition.  The team spirit amongst the girls was immense, and when one of the team won, there was shared joy, but likewise collective sadness and encouragement to any of the colleagues who experience an adverse result.  When one of the team was on the Mat, the opposition had to contend with not just their British opponent, but a vociferous crowd of very loud supporters shouting such encouragement from the terraces that Roy Inman had to turn around at one stage to calm things down so that his own guidance from the chair wasn’t drowned out by the noise.

Marie-France Mil was particularly astonished to have been dismissed so convincingly, having been a favourite to progress to Gold with her form of seven medals in the six previous European Championships at -66kg and Open categories, including a Gold.  Marie-France had not done her homework on an opponent she had never previously fought in this weight category.

Dawn progressed to be matched against Christine Penick of the USA, who was four years her senior at 24 years old, and had run of USA National Championship wins in the previous six years with 4 Golds and a Bronze, and earlier that year had won the Pacific Rim Gold, which, back then was the equivalent of a European Grand Prix or Grand Slam Event. Penick was physically strong and aggressive but led some commentators at the time to question her techniques when she had caused injury to five previous opponents.

The duration of matches was increased from 4 minutes to 5 minutes in this competition for all medal-determining matches and Dawn’s fight with Penick went the full course, before Dawn deservedly won on Hantei, but not before she had suffered two flying Waki-gatames and a wrist lock which the judges did nothing to rule against.  Colin Campbell was editor of Judo Magazine at the time and was watching this extraordinary contest: he commented later, in his write up of the match that, “… Having since watched the three attacks on video, there is no doubt at all in my mind that each was a Hansoku-make offence, the more so that it left Dawn going into the final with badly strained ligaments.”

And so it was, Dawn went into the final against Edith Simon of Austria, a talented Judoka but aged only 19 and without the pedigree of success under her belt of the Belgian Marie-France Mil, who Dawn had comfortably beaten in earlier rounds. One-handed throws were all that Dawn could manage with her injury from the earlier bout, and despite this, she did create another uproar from the highly partisan and noisy British support when she created a masterly one-handed, neatly-timed Deashu-harai throw, that was close to Ippon. This unequal struggle eventually resulted in an exhausted Dawn to perish when taken to ground in Newaza and fatigue to Kesa gatame and an Ippon to Edith Simon.

Nevertheless, having won Silver in the first weight category completed in this Championship, Dawn was held aloft by her team mates as a hero, and she certainly won the battle of hearts and minds of the knowledgeable crowd in attendance who saw the talent, skill and technique within her that would subsequently go on to win her further accolades in the form of a Bronze medal at future World Championships in Vienna in 1984. She retained the weight category of -66kg for the rest of her career, which included two further Silvers at European Championships in 1982 and 1983, plus a further 15 medals, including six Golds at major World and European Events, and eight Golds at British Championship events. Following a short spell of competitive retirement, Dawn came back in her mature years to win the Veteran’s World Championship Gold.  What a woman! What a competitor! 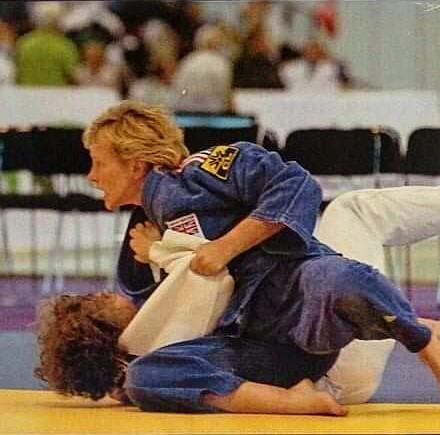 Photo: Dawn Netherwood out of retirement and into the Master’s and a Gold World Championship

What does Dawn remember about the first Women’s World Championships and its impact on her life and women’s judo?

Dawn started judo at age 13 and was a member of Huddersfield Judo Club.  Despite being a regional competitor at ballroom dancing, no less, she gave this up in favour of judo.  She came from a sporting family with her mother being a competitive swimmer and her father playing cricket for Yorkshire.  When she took part in the first World Championship’s her Huddersfield coach was Barry Caldwell.  Such was her passion for judo and her desire to cement her place in the GBR Team and to go to the first Championship’s, she took the big risk to relocate to London. Before getting their own flat, she and Anne Hughes stayed with Marion Woodard, part of the coaching team, in her spare bedroom.  This was typical of the culture of the “family of judo” at that time where everyone put themselves out to help others progress their judo ambitions.

She recalls how hard she worked, and the regular squad training sessions that were held by Roy Inman, especially at the sports college in Loughborough where the girls undertook what Roy himself called the “Devil Training”. Dawn recalls Roy pushing all the girls to their absolute limits with sprints, shuttle-runs, uchi komi, and hard randori. They were often physically exhausted to the extent that they could not take another step, and were on their knees – but no quarter was given and the encouragement from Roy was often along the lines of casting doubt on their ability to be part of the World’s Squad.  This may seem a cruel way to incentivise and get results, but Roy had to know who would go that extra mile.  It was worth it… Dawn recalls Roy tapping her on the back when she was on her knees with her head in a bucket, throwing up, and he confirmed to her that she had “made the team”. At that point, she knew it was all worthwhile. 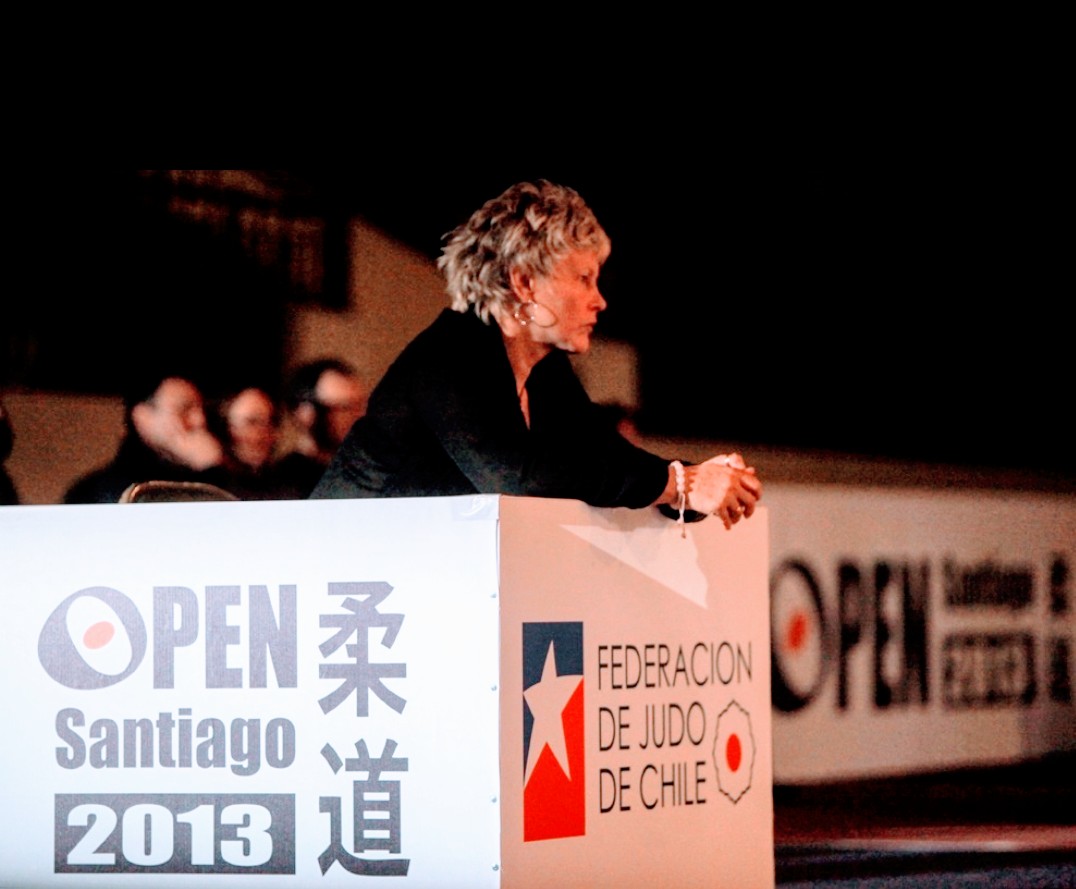 Dawn Netherwood -66Kg – where is she now?

Dawn is the Peter Pan of judo. Traditionally, Peter Pan on stage is played by attractive, petite adult women, free-spirited, and mischievous, who can fly, never grow up and have never-ending adventures around the world. This sums up the essence of Dawn’s career.

Dawn talks about a period of time when she “retired”… and it must be true because she must have made some time to move permanently to France, get married and divorced and have two sons, now aged 28 and 30 – but in terms of time, it must have been a blink of an eye.

After competitive retirement she coached in the UK as an assistant to Roy Inman, and this was foundation upon which she has transformed into a leading international judo, sport, coaching and fitness Management Consultant: which is what currently keeps her occupied:  she is Director, President and Head Coach of PowerWave France, the global cross training concept.

In between then and now, Dawn was a recognised International Sport and Judo Coach and amongst her list of accomplishments she was the physical trainer of Marine Joubert of France at the Rio Olympic Games in Trampoline; physical trainer of athletes in the French disabled ski team; and between 2012 and 2018 she was a Coaching Advisor for Team GB. For the London 2012 and Rio 2016 Olympic Games she spent time in Chile as advisor coach to the National Chilean Olympic Judo Team for those Olympics.

But perhaps her most remarkable achievement was her comeback into competitive Judo.  Returning in 2010 to the World Championships in Budapest, she finally won a Gold Medal and World Champion title in the women’s F5 -63kg.  Dawn went on in subsequent years to win Gold Masters in 2011 and 2012, making a triple haul of Women World Championships in the Veteran category.  Dawn’s continuous contribution to judo is recognised through her 7th Dan grading.

What did the First Women’s World give Dawn?

In her own words, Dawn believes that “those days in her formulative years set the tone of her life for the future and gave her the grit, singlemindedness, and determination to succeed in whatever endeavour she participates.” But it was not a selfish, hard-nosed determination to the exclusion of others.  Being part of the GB Women’s Team at that time she learned the benefits of being supportive of each other, and sharing the pain of training, and also the excitement of competing, the disappointment of losing, but especially the exhilaration of winning. Dawn thinks this was transformational in a positive way in forming her attitude to life’s ups and downs.

Dawn finished our chat with a special request… could I make sure the articles says that she wanted to thank the whole Great Britain Team for being part of her family and the best friends in the world …. and GREAT ladies.

First Women’s World Championships #2 – Catching Up With Ann Hughes Scroll to top
Select the fields to be shown. Others will be hidden. Drag and drop to rearrange the order.
Click outside to hide the compare bar
Compare