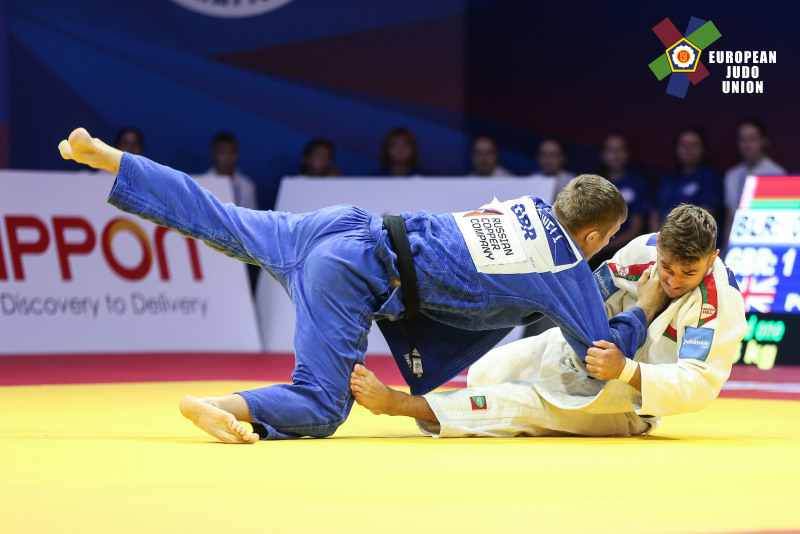 GB Judo went out in the first round of the 2018 European Mixed Team Judo Championships in Ekaterinburg on Wednesday 18 July.

The British team took on Belarus and got off to a great start with Lele Nairne getting the better of Darya Skrypnik in the -57kg contest.

The Belarussian judoka is a former World medallist at -52kg and she made the quicker start as she forced Nairne to pick up a shido for passivity.

However, Nairne’s greater power started to tell and with just over a minute to go Nairne countered Skrypnik for waza-ari. The Belarussian judoka came back hard in the last minute and was close to scoring on a couple of occasions.

The British judoka held her off despite picking up one more shido and that gave GB Judo a 1 – 0 lead.

Dan Powell followed that up with a good performance against -66kg WRL13 Dzmitry Minkou in the -73kg contest.

These two had fought once before as Juniors at -66kg with the Belarussian winning that contest in Kaunas.

It was an even contest throughout with both fighters having opportunities to score. The contest went into golden score with a single shido against Minkou the only change to the scoreboard.

With just under two minutes gone in golden score Powell finished the contest with a lovely low Kouchi Gari for ippon.

GB Judo now had a 2 – 0 lead going into the -70kg contest between Ebony Drysdale – Daley and Zhanna Asipovich.

The British fighter controlled things from the start with Asipovich struggling with Drysdale – Daley’s strength.

The Belarussian judoka picked up two shidos for passivity with the British judoka looking more likely to score of the two. However, with less than twenty seconds to go Asipovich countered the British judoka for a decisive waza-ari score which brought the match score to 2 – 1.

At -90kg Frazer Chamberlain took on Yahor Varapayeu. The Belarussian judoka had finished fifth at the European Championships in Tel Aviv earlier this year and he brought that form onto the mat with an early waza-ari score.

Varapayeu showed his sharpness as he took advantage of an opening to apply shime-waza and force Chamberlain to tap out.

This meant that the match score was 2 – 2 going into the penultimate contest as Sarah Hawkes faced Maryna Slutskaya in the +70kg contest.

The Belarus judoka made the better start as she forced Hawkes into picking up a shido for passivity before throwing her for waza-ari.

Eventually the pressure told as Slutskaya executed a turnover in newaza and finish the contest in osaekomi.

Conor Murphy faced Mikita Sviryd in the +90kg contest with a place in the second round at stake. The British judoka was unable to match the Belarussian’s power and was thrown for ippon the in the final minute to leave the final match score as 4 – 2 in Belarus’s favour.

Memorable weekend at Brain Tumour Charity Judo Tournament
Scroll to top
Select the fields to be shown. Others will be hidden. Drag and drop to rearrange the order.
Click outside to hide the compare bar
Compare
Wishlist 0
Open wishlist page Continue shopping