You are here: Home / Events / Fifth place finish for Adlington in Baku 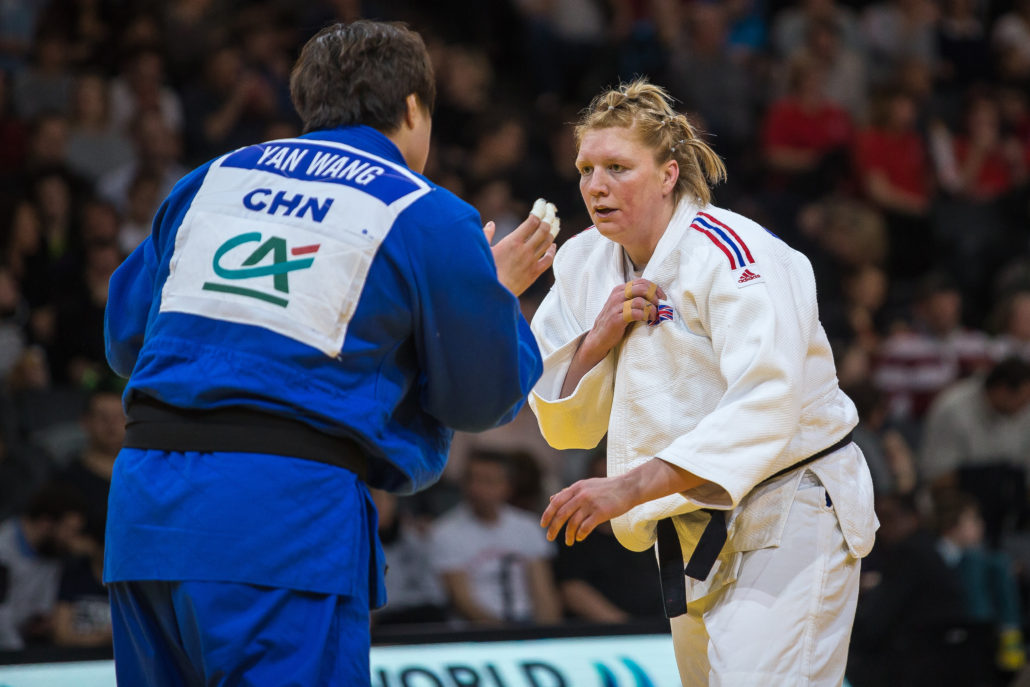 Sarah Adlington put in a valiant effort but just missed out on a bronze medal at the 2018 World Judo Championships in Baku on Wednesday 26 September.

The +78kg judoka took on WRL 2 Larisa Ceric (BIH) for bronze and it was tight and tactical contest with both judoka negating each other for the most part.

A long opening exchange led to a passivity shido for the two fighters and the contest continued in a similar fashion.

Ceric however was able to get more attacks in as the contest went on which meant that Adlington got a second shido for passivity as the fight went into golden score.

Adlington continued to press her opponent but 38 seconds into golden score Ceric took the contest with a driving waza-ari score.

“Not right now but I’ll be able to look back and take a lot of positives from today.

“Since June 2017 that I’ve been able to put a run of competitions together without picking up any injuries so, it’s been over a year that I’ve been competing without breaking.

“I think that has had a massive impact on the way that I could perform today. For the first time in a long time I was confident in the work that I’d put in coming into a tournament.”

Adlington started her day in impressive as she saw off Bangladesh judoka Tahamina Aktar Lopa inside the opening minute with a massive Harai-goshi for ippon.

WRL 6 Maryna Slutskaya (BLR) was next up in the third round the Belarus judoka had won their last contest at the Zagreb Grand Prix in July.

This time though the win went to Adlington and once again it was by ippon as she drove Slutskaya to ground with Tsuri-goshi.

This set up a quarter-final against Brazil’s WRL 4 Maria Suelen Altheman and this contest came down to shidos.

Both fighters picked up shidos inside the opening half of the fight, Adlington for passivity and Altheman for defensive posture.

The Brazilian judoka took control in the second half of the contest though despite Adlington’s best efforts.

The repechage final was against Croatia’s Ivana Maranic and it took a while for both judoka to get going as they felt each other in the opening exchanges.

Adlington though looked the more likely to score and, having forced Maranic into picking up two shidos to just her one, the British judoka countered a weak attack with Sumi-otoshi for waza-ari.

Adlington showed good experience to hold off her opponent for the rest of the contest despite picking up a late shido for stepping out.

Tomorrow will see GB Judo in action in the Mixed Team Championships.

Competition will start at 0600 UK time with live coverage via @BritishJudo on Twitter. There will be a full digital live stream via britishjudo.org.uk, live.ijf.org and Eurosport Player. There will also be broadcast coverage of the final block on the BBC Sport website and Red Button as well as Eurosport UK.

Close defeat for GB Judo in World Teams Scroll to top
Select the fields to be shown. Others will be hidden. Drag and drop to rearrange the order.
Click outside to hide the compare bar
Compare