You are here: Home / Events / Fifth on Worlds debut for Jemima Yeats-Brown 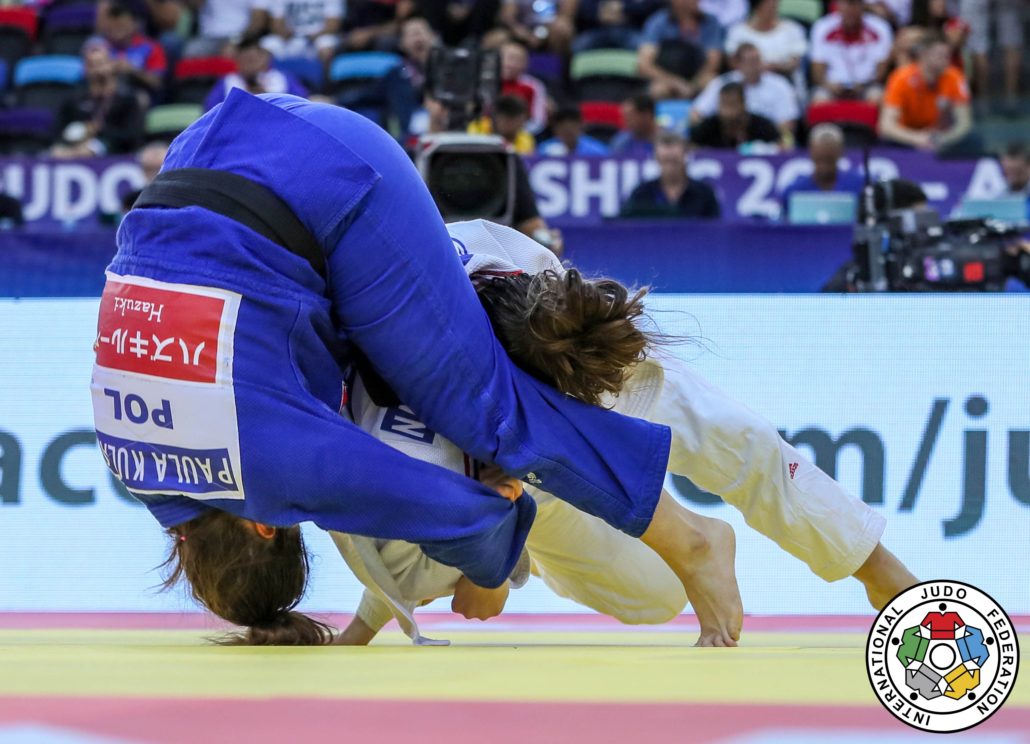 The 23-year-old Ryecroft judoka had only moved up to -78kg in May this year at the Hohhot Grand Prix.

However, she’s already made an impression with wins over WRL 7 Marhinde Verkerk (NED) and former World medallist Luise Malzahn (GER) at the Budapest Grand Prix as well as a bronze medal at the Saarbrucken Senior European Cup.

Yeats-Brown’s bronze medal contest would see her take on Verkerk once again and the former World Champion came into the fight with a real edge in experience.

The British fighter made a strong start and had an early waza-ari score taken off. The contest was pretty even throughout and both judoka had chances to score in regular time.

The fight went into golden score with no shidos and with over a minute gone in added time Verkerk was able to throw Yeats-Brown for ippon with seoi-nage.

The British fighter was understandably disappointed but determined to improve and be back in the medal fights again.

“When you don’t finish with a medal it’s always hard, but I beat some good people, so I think next time I’ll get a medal.

“I fight everyone the same, whoever they are, whatever they’re ranked. My strategy is the same to go out and give it to them so whatever their ranking it don’t really change what I do.

“I think a few more months training, a few more kilos, I’ll be getting a medal next year.”

In the opening exchange Yeats-Brown managed to catch the sleeves of the Cuban fighter and threw her with a strong drop sodi.

Poland’s Paula Kulaga had shown some form in 2018 with a couple of European Open medals but Yeats-Brown was too good for her in the third round.

Two drop attacks for waza-ari and ippon in the space of 40 seconds saw the British judoka move through into the quarter-finals.

The British judoka made a strong start with her gripping forcing Steenhuis to pick up a shido for stepping out.

However, in the very next exchange Steenhuis threw Yeats-Brown for ippon with uchi-mata, dropping the British fighter into the repechage final against European champion Madeleine Malonga (FRA).

There were 53 WRL places between the two judoka and Malonga came out hard, looking to win the fight early.

The French judoka put in a big attack which Yeats-Brown did brilliantly to spin out of. The British fighter went straight into shime-waza to win the contest by ippon and setup a bronze medal contest against Verkerk.

2017 World bronze medallist Natalie Powell was unable to match her result from Budapest last year as she went out in the third round to Klara Apotekar (SLO).

WRL 2 Powell started well with a routine win over Sarah Myriam Mazouz (GAB). The British judoka bided her time and rolled the Gabon fighter for waza-ari with a minute on the clock.

A second waza-ari score followed with little over a minute left as Powell closed the space on Mazouz and took her back to secure the win.

Slovenia’s Apotekar was next up in the third round with the winner going into the quarter-finals. Powell made a strong start as she ride and rolled the Slovenian for waza-ari in the opening minute.

Apotekar responded well though and continued to apply pressure on the British judoka and with two minutes on the clock she threw Powell for ippon with sumi-gaeshi.

Speaking afterwards Powell said: “The training’s being going really good, had nothing to moan about or worry about. It just hasn’t come together.”

Tomorrow will be the turn of +78kg judoka Sarah Adlington

Seventh for Sally Conway at 2018 Worlds in Baku

Join Japanese legend Yoshihiko Iura for National Kata Course in November Scroll to top
Select the fields to be shown. Others will be hidden. Drag and drop to rearrange the order.
Click outside to hide the compare bar
Compare