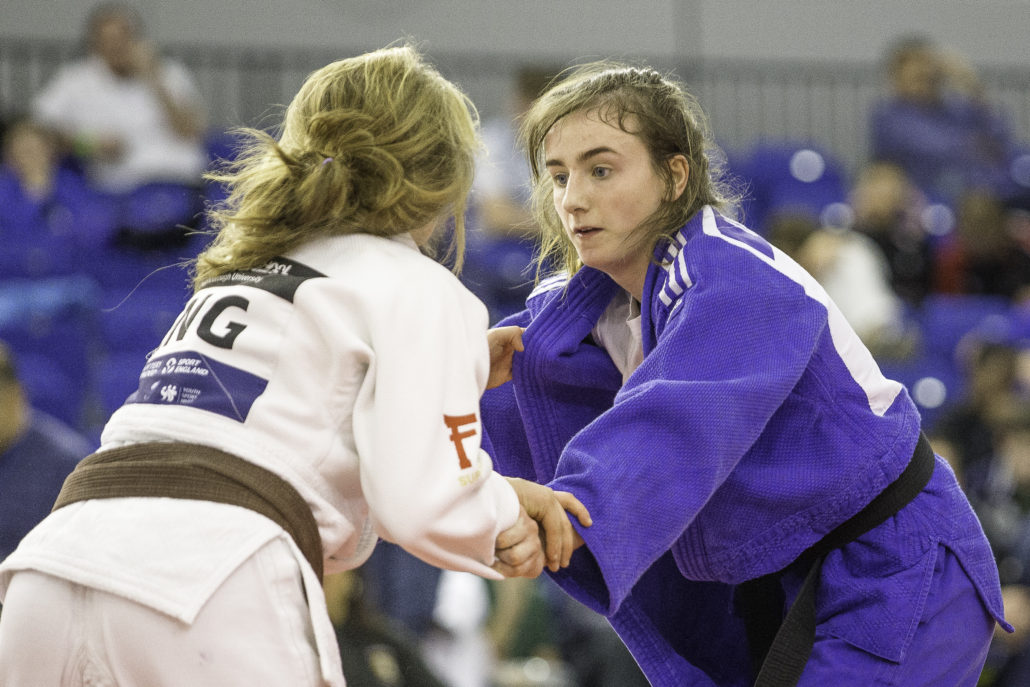 Yasmin Javadian impressed on her Junior Europeans debut with fifth place on day one (Thursday 13 September) of the 2018 Junior European Judo Championships in Sofia, Bulgaria,

The Coventry Judo Club judoka is in her first year at Junior level but had earned her place in Bulgaria with three Junior European Cup podium finishes including silver medals in Coimbra and La Coruna.

Javadian made a solid start as she outworked Hana Kavalenka (BLR) in her opening contest. The Belarussian judoka was forced into picking up two shidos, for false attack and passivity respectively.

In golden score Javadian took advantage of a poor drop attack by Kavalenka to apply shime-waza and force her opponent to tap.

Top seed Amber Ryheul was next up in the quarter-finals and the British judoka did well to stay in the fight against her more experienced opponent.

For the second contest in a row Javadian went into golden score, this time a shido against her name. Ryheul continued to apply pressure and forced Javadian into a second shido, this one for defensive posture.

The Belgian judoka looked to have won the contest as she worked Javadian into a hold down in newaza with a solid sangaku. However, the British fighter showed superb determination to get out and keep the contest alive.

In the very next exchange Javadian took her chance and threw Ryheul for waza-ari and booked her spot in the semi-finals.

2017 Cadet World silver medallist Faiza Mokdar would be Javadian’s opponent in the semi-final and the British judoka had a 1:1 record against the French fighter.

Their last contest came at the 2017 Cadet Europeans where Javadian won in golden score on shidos. This time though she was unable to get into the contest as Mokdar applied juji-gatame in newaza and forced Javadian to tap.

This was the British fighter’s third bronze medal contest in European Judo Championships following two fifths at Cadet level in 2015 and 2017.

Unfortunately, it proved to be the same result in Sofia as the British judoka was unable to match the strong gripping of Marcus Tabellion and she picked up three shidos to finish outside the medals.

There were two seventh places for Jaime-Leigh Whitaker (-44kg) and Olivia Piechota (-52kg). Glossop judoka Whitaker made an impressive start on her Junior Europeans debut as she made short work of Fanni Vaskas to secure her place in the quarter-finals.

Whitaker threw her opponent in the opening exchange and went straight into osaekomi to win inside 30 seconds.

Turkey’s Gamze Sayma was too good in the quarter-finals as she threw Whitaker for ippon inside the opening minute.

Dropping into the repechage Whitaker took on Shafag Hamidova and two waza-ari in quick succession from the Azerbaijan judoka gave her the win.

Piechota had gone out in the round of 16 last year in Maribor and she improved on that result as she saw off the challenge of Ana Agulhas (POR) with a waza-ari the decisive difference.

In the quarter-final the majority of the contest was spent in newaza as Spanish judoka Nina Estefania Esteo Linne went to work on the ground.

Piechota did well initially to get out of a hold down but Esteo Linne showed good skill to recycle and she was able to finish the contest via osaekomi.

This dropped Javadian into the repechage final where she took on Marcus Tabellion (FRA).

Amy Platten (-48kg) went out in the first round on her Junior Europeans debut against Tamar Malca (ISR).

The Redbridge judoka made a good start as she forced Malca into picking up two shidos. However, the Israeli judoka took a waza-ari lead and with Platten pressing she took advantage to finish the contest with just over 90 seconds left with another score.

Day Two will see Josie Steele and Acelya Toprak take to the mat at -57kg. Competition starts at 0800 UK time with live stream via EJU.net and full draw on ippon.org

Glasgow European Open Entry Now Open To Senior Ranking List Scroll to top
Select the fields to be shown. Others will be hidden. Drag and drop to rearrange the order.
Click outside to hide the compare bar
Compare