You are here: Home / GB Judo / Fifth for Conway at World Masters while Piovesana on top of podium in ... 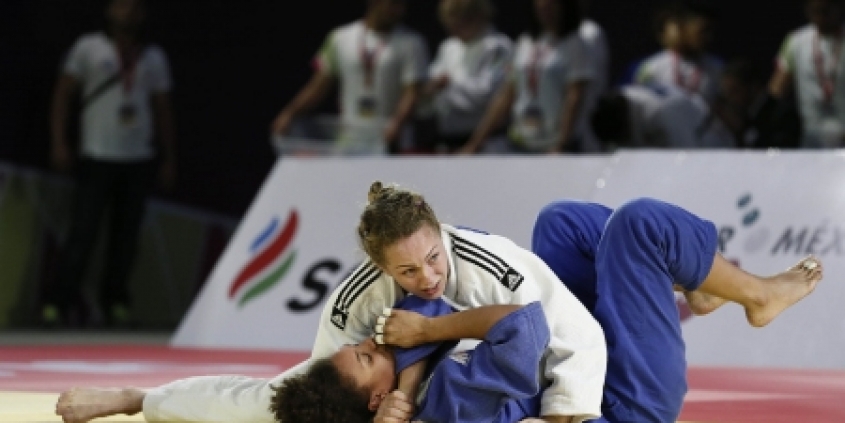 Sally Conway took a 5th place in Mexico at the IJF World Masters today, narrowly missing out on a medal after a day of positive judo.

Sally Conway started the day against Onix Cortes Aldama, who Conway had defeated twice earlier this year. After an even three minutes, Conway took charge and threw Cortes Aldama for ippon with a big Uchi-mata.

Conway then moved into the quarter-finals to face world number three, Columbia’s Yuri Alvear. With only one previous encounter in last year’s Samsun Grand Prix semi-final, which went the way of Alvear by yuko, Conway was quickly on to the Columbian judoka.

On the counter-attack, Conway threw Alvear and was awarded a waza-ari by the referee, but this was overturned after review. Now behind on shidos, Conway went on the attack but was caught with a hold down which earned Alvear a waza-ari score. With Conway running out of time in the contest, it was Alvear who took the semi-final place, leaving Conway to face Perez in repechage after a contest which seemed to go against the British judoka on bad luck.

In repechage, Conway continued her attacking judo, scoring waza-ari with her trademark Sumi-gaeshi before getting the hold down on Perez (PUR), who tapped out and saw Conway into the bronze medal contest.

Conway faced Seongyeon Kim (KOR) in the bronze medal contest. After an even start Kim found Conway in an awkward position and threw for waza-ari. Despite numerous attacks, Conway was left to settle for the 5th place finishing the contest a waza-ari down.

Alice Schlesinger was also on the tatami for Great Britain today, facing Turkish judoka Busra Katipoglu in her first contest in the -63kg category. Schlesinger had swept aside Katipoglu two weeks prior on her way to Baku Grand Slam gold, but it wasn’t to be today. The contest went the full distance, but with neither competitor able to get a score on the board, the result went against Schlesinger on shidos (penalties).

Tomorrow will see the final day of the 2016 IJF World Judo Masters and will see Britain’s -78kg pair, Natalie Powell and Gemma Gibbons in action. The preliminary rounds begin at 17:00 (BST) and can be watched live on ippon.tv

Follow the action live with @BritishJudo on twitter and send your support to the team using #WeAreGBJudo.

Cadets and Junior’s in form in Portugal and Austria

In Portugal, Amy Platten and Yasmin Javadian were both on the podium taking bronze medals.

There were also placings for Michelle Boyle (7th), Dan Powell (9th) and Shelly Ludford (9th) in Austria, while in Portugal, Molly Harvey and Eve Soakell both claimed 7th places.

Dan Grade Promotions – May 2016 Scroll to top
Select the fields to be shown. Others will be hidden. Drag and drop to rearrange the order.
Click outside to hide the compare bar
Compare