You are here: Home / Association news / Fast Paced Action on show at the 2018 Junior British Championships 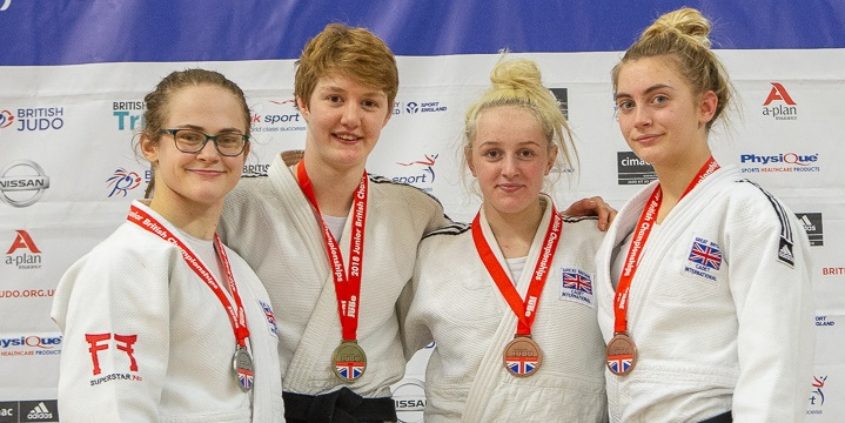 It was a fantastic display of judo on show in Sheffield today as the best of British Juniors took to the mat at the English Institute of Sport looking to be crowned 2018 Junior British Champion.

In one of the most competitive categories of the day, Highland Budokan’s Josie Steele defeated all challengers to take home her first -57kg Junior British title to add to her Glasgow European Open Gold medal claimed in October. Kiera Bateman (Silver), Darcie Hancocks & Leah Grosvenor (Bronze) all tried to halt the Scot’s momentum, but there would be no stopping Steele today!

Yasmin Javadian was unable to retain her crown in the -52kg competition as Tonbridge’s Molly Harvey claimed her maiden title as she pushed Javadian into Silver medal position. Jasmine Hacker-Jones and Fiona Todman claimed the bronze medal positions.

Oliver Nash was in imperious form throughout the day as he stormed to Gold in the -73kg competition, as he improved upon his 2017 Championships result. Archie Platt pushed him close at times, but the Team Bath/Tonbridge judoka demonstrated his range of judo to once again finish in the medal places.

There were some huge throws on display in the -66kg category as Michael Fryer claimed his second title at Junior level. He fought off strong opposition including the likes of Joe Lynch (Silver), Henry Wakes and Jacob Aldridge (Osaka) to add to his brother Lewis’ medal the previous week in the Cadets British Championships.

Brother and sister Max and Cordelia Gregory both finished amongst the medals for South Brent as Max claimed Gold in the -100kg. Sister Cordelia finished in Silver medal position in the -78kg behind Imogen Ranner,

“I felt strong as I progressed through the day. I had worked hard in the previous weeks to ensure that I came into these Championships in the best shape possible” explained Max.

“It was a competitive division today and I felt like I got better as the day went on. Andrew McWatt (Silver medallist) pushed me close but what I thought I did well was find a way to win against these kinds of opponents. I definitely need to rest my legs now though because it was a tough day, but I am so happy I came away with the Gold medal!”.

Daniel Rabbitt once again finished amongst the medals as he claimed his first British Junior title with victory in the -60kg seeing off the challenge from Joshua Giles (Silver), Dylan Munro (Edinburgh) and Charlie Young (Ryecroft).

Click here for the full gallery of photos from the 2018 Junior British Championships.

Click here for the full results from the day

2018 Senior British Championships Timetable Released Scroll to top
Select the fields to be shown. Others will be hidden. Drag and drop to rearrange the order.
Click outside to hide the compare bar
Compare