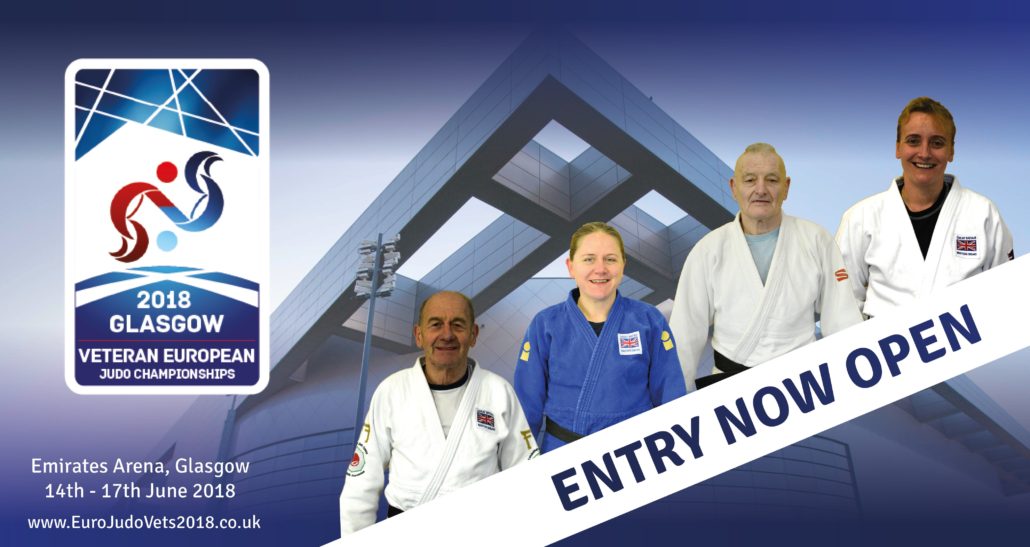 British Judo are pleased to announce that entry for the upcoming 2018 Veteran European Championships is now officially open!

Hosted at the Emirates Arena in Glasgow, the event promises to be a big one as athletes from across Europe descend on Scotland in the battle to be crowned European Champion between the dates of 14th-17th June 2018.

The 2017 edition of the Championships proved to be a great weekend for British Judo, with success both on and off the mat. GB Judo Masters athletes fought hard throughout the weekend to gain 12 medals, including four golds, in what was a tightly contested event. In Glasgow, we will be hoping to smash that target.

British Judo Chairman, Ronnie Saez commented: “I would like to thank the EJU for their continued support and trust in our ability to deliver this event to their high standards which we aim to exceed.”

“We have a strong history of delivering high quality EJU events in Scotland and, as the Chair of British Judo’s Veterans Commission, I look forward to welcoming international veteran athletes back to the UK.”

“As a proud Glaswegian, I hope you enjoy your time in the City and I wish you all the best of luck for the event.”

Stan Cantrill, a veteran competitor himself, is equally excited about the Championships coming to Glasgow.

“It’s the most wonderful thing that has ever happened. We’re really, really pleased.”

“Of course I’m going to compete. I have competed in all the European and World  Veteran Championships. I’m looking forward to the home ground advantage”, he noted.

870 judoka from 33 counties competed at the 2017 edition of the competition held in Zagreb so it promises to be an action packed four days of judo in Scotland!

WHY SHOULD I ENTER?

All GB competitors will receive two free tickets for the day of their competition.

All athletes will receive a range of exclusive discounts off leading Glasgow tourist and visitor attractions including the likes of Celtic Park and Hampden Park Stadium Tours, Loch Lomond’s Sea Life Centre and Tennents Brewery Tours amongst others.

Following the team event, there will be the opportunity to attend a two day training camp led by former World Champion Mr Neil Adams MBE 8th DAN and supported by the EJU.

A competitor must hold a current and valid Passport and Licence of his/her NF and must not have represented any National Team in a competition at international senior level at any time in the twelve months period before the start date of these Championships. The responsibility to respect this rule is on the National Federation and/or Club who inscribes the participants in JUDOBASE.

To enter and compete in this event you must have, or have applied for, a current and valid IJF/JudoBase Registration Card. If you are already in possession of one, you do not need to apply for another.

Back The Bid For Martial Arts to be Reinstated on GCSE/A Level Syllabus Scroll to top
Select the fields to be shown. Others will be hidden. Drag and drop to rearrange the order.
Click outside to hide the compare bar
Compare