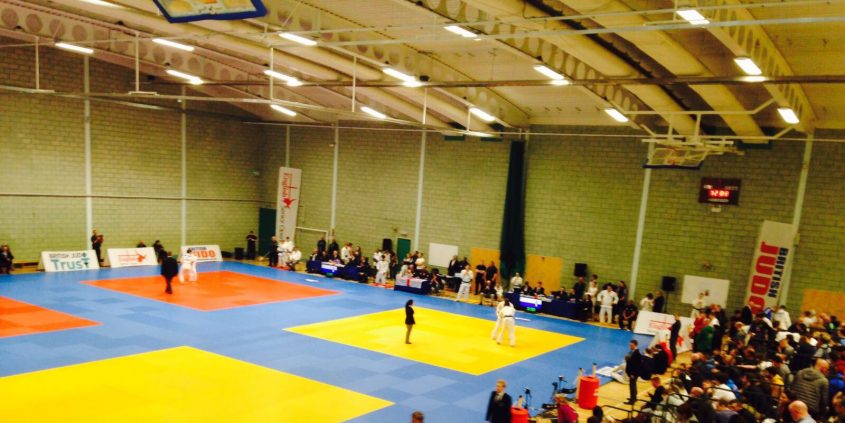 The University of Wolverhampton’s Sports Campus in Walsall hosted this years English Open on Saturday 29th April with both juniors and seniors taking to the mat on a hectic day of competition.

With over 400 judoka entered throughout the day, it was sure to be a firecracker of a day, filled with high-class judo.

It was the juniors chance to shine in the morning as Joshua Giles took the first gold of the day in the -55kg category with the Coventry fighter beating Mohammad Alip (Ernest Bevan Phoenix) to 1st place. Nathan Gallacher (Samurai) and Toby Sagacio (Australia) shared the bronze medal.

Sian Bobrowska took the first gold of the day in junior womens section of the day in the -48kg category with the Hardy Spicer fighter beating Jasmine Stringer (Tonbridge) to 1st place. Shannon Tarandij (Huddersfield) claimed the bronze medal.

Lucy Day (Redbridge) sprung a surprise and came out on top against Junior British Champion Acelya Toprak (Metro) in the gold medal contest in the -63kg while Olivia Spellman (Pinewood) and Lucy King (Budokwai) shared bronze.

Promising youngster and current British Champion Eric Ham won the -73kg competition as he successfully added the English Open title to his name. Aiden Moffat (JudoScotland) was powerless to stop the Glossop fighter from claiming the gold in the final. Daniel Pacitti (JudoScotland) ensured that JudoScotland claimed a further two medals in the -73kg by finishing in bronze place alongside Oliver Nash.

Jamal Petgrave (Westcroft) continued his impressive run of form by making the step up from junior competition, to claim his first senior title in the -90kg. Sebastian Green  (Wolverhampton University) could not find a way past Petgrave with Thomas Luckus (Ernest Bevan Phoenix) claiming his second medal of the day as he won bronze alongside Vidar Skrettling (Oxford University).

Sian Bobrowska (Hardy Spicer) won gold in the -48kg category as she came out on top against Jasmine Stringer (Tonbridge) in the final. Natalie Birkett (Grimsby) and Abbie Davis (Wolverhampton University) won the bronze medals on the day.

Julia Scardone claimed another medal on a productive day for Camberley Judo Club as she took home gold in the -52kg with Sarah O’Gara (Ireland) winning a second silver medal after finishing in the same position in the junior competition earlier in the day.

Acelya Toprak was able to shrug off the disappointment from finishing runner up in the junior -63kg category by claiming gold in the senior competition. She was able to defeat Greek judoka Ioulietta Boukouvala in the final with Olivia Spellman (Pinewood) and Natasha Glassford (Ealing) in the bronze medal positions.

GB Judo squad member Gemma Howell added another medal to her already blossoming collection of European and National titles as she defeated Ebony Drysdale-Daley (Erdington) in the final of the -70kg category. Shelley Ludford (Osaka) and Chloe Nunn (Bishop’s Stortford) both backed up their gold and silver medals won from the junior competition with bronze medals respectively.

Chrissie Webb (Pinewood) claimed the final gold medal of the day as she defeated Danielle Bynoe (Bacup) in the +78kg with Ronda Crampton-Reid (Navy) in bronze.

For full results from the day, please click here

Sportability Kids get on the Mat

Chichester Ronin Judo Club Scoop Clubmark Prize Scroll to top
Select the fields to be shown. Others will be hidden. Drag and drop to rearrange the order.
Click outside to hide the compare bar
Compare