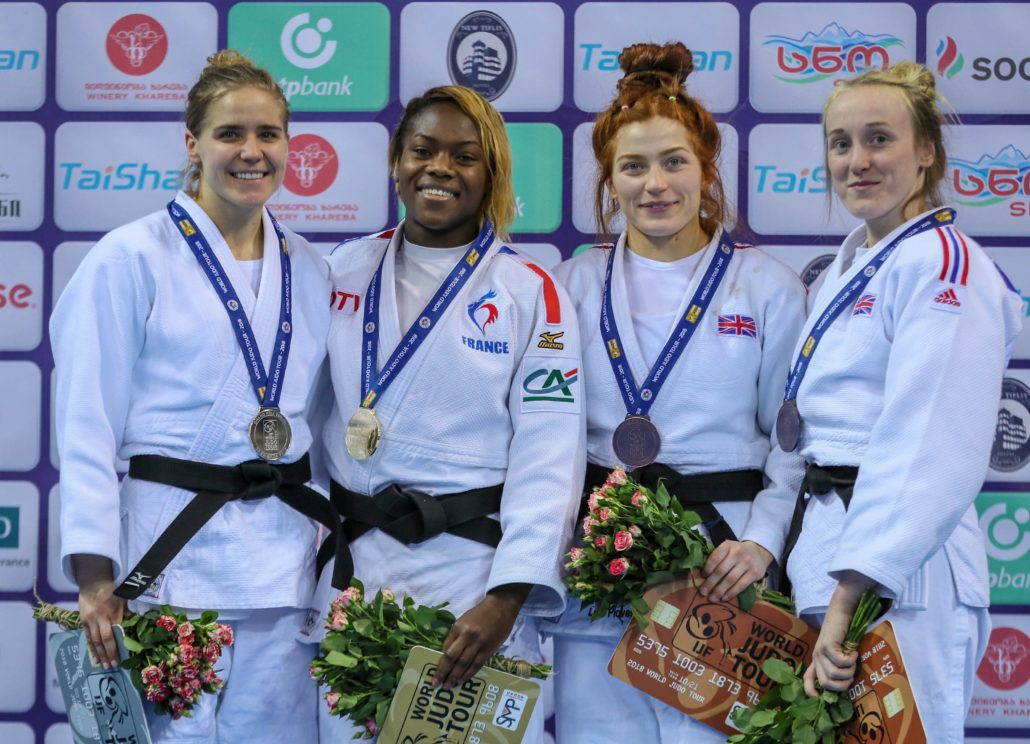 The Grand Prix in Georgia is traditionally one of the tougher events on the IJF World Tour with a strong home team entered. There were also a number of athletes using the event as a final bit of competition practice ahead of the European Championships in Tel Aviv, Israel at the end of April (26 – 28).

Renshall, who will make her European Championships debut later this month, was looking for her first medal of 2018 following fifth place finishes at the Tunis Grand Prix and Paris Grand Slam.

The St Helens judoka went in as third seed and came through a tough first contest against Brazil’s Alexia Castilhos.

The British judoka dominated proceedings for the most part but she was forced into golden score where she eventually forced Castilhos to pick up three shidos, which secured the win for Renshall.

Karolina Talach (POL) was next up in the quarter-finals and the Polish judoka made the early running as she put in a number of attacks. Eventually with just under 90 seconds gone in the contest Talach was able to throw Renshall for waza-ari before finishing the fight in newaza.

Dropping into the repechage Renshall took on Rotem Shor (ISR), with the Israeli judoka holding a 2 – 1 record going into that contest.

In another tough and physical contest both judoka had picked up a shido going into the final minute before Renshall was able to get a waza-ari score with just 30 seconds left on the clock.

Renshall held off Shor from there as she secured a place in the bronze medal contest where she faced another Israeli judoka in Inbal Shemesh. 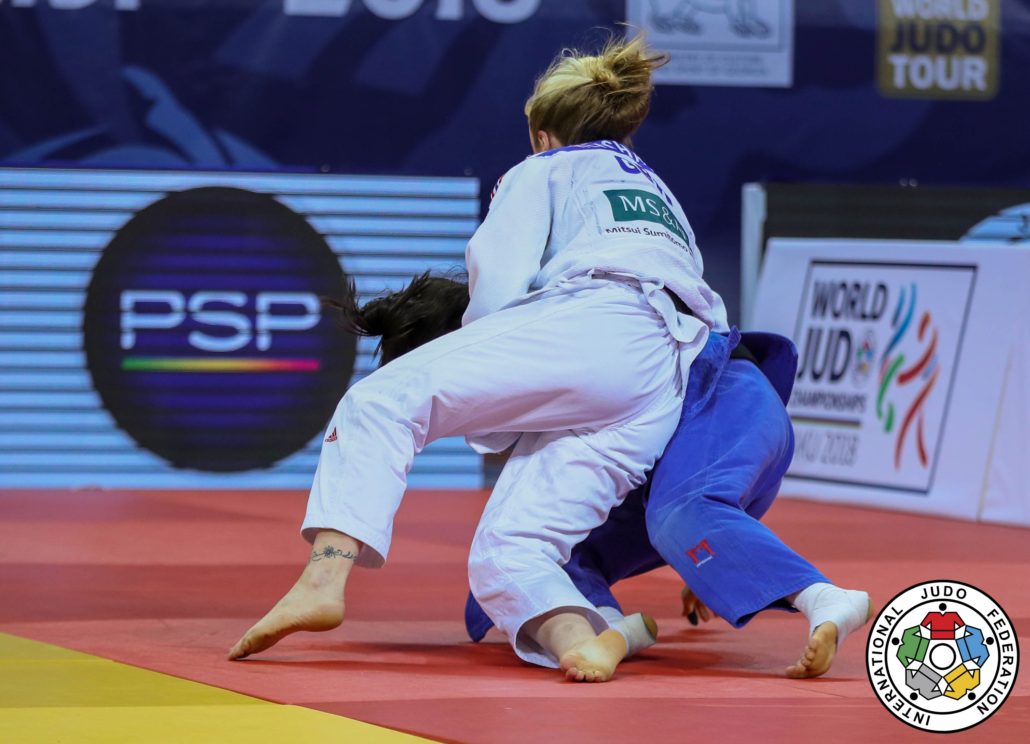 Renshall drives Shemesh for waza-ari in her bronze medal contest

The British judoka had won their previous encounter in decisive fashion but this time she was forced to grind out the win with a waza-ari score in final twenty seconds giving her the win.

This was Renshall’s third Grand Prix medal and her first rostrum finish since her Grand Slam silver in Abu Dhabi last October.

Birmingham judoka Piovesana was fighting for the first time since her Junior World Championships bronze in Zagreb last October.

The 21 year old took on home judoka Mzia Beboshvili (GEO) and went behind by a couple of shidos early on before finishing the contest with a lovely throw for ippon.

Piovesana took an early waza-ari lead in her quarter-final with Shemesh (ISR). The Israeli judoka continued to apply pressure and with just over a minute left she levelled the score with a waza-ari and went straight into a hold down to finish the contest.

This meant Piovesana went into the repechage where she took on Brazil’s Yanka Pascoalino. The British judoka forced her opponent to pick up two shidos but it was a waza-ari score in the final ten seconds of the contest that gave Piovesana the win.

Australia’s Katharina Haecker would be Piovesana’s opponent in the bronze medal contest with the World No.11 having won their previous encounter at the Antalya Grand Prix last year.

This time though Piovesana took control from the start and she soon forced Haecker into picking up two shidos. However, the Australian did enough to stay in the fight and the contest went into golden score.

Piovesana took her opportunity just over 30 seconds into golden score as she threw Haecker for waza-ari and secured her third Grand Prix medal. 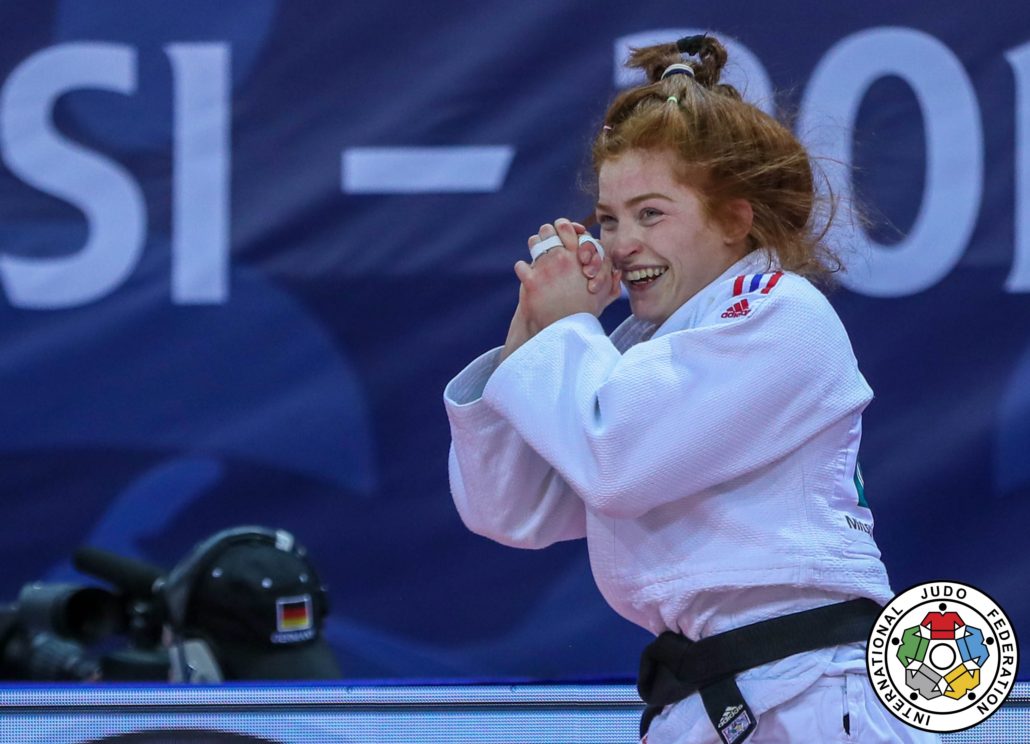 Piovesana was delighted with her bronze medal win over Haecker (AUS)

The 350 world ranking points for the medal should also see Piovesana move back into the world top 30.

There were also a fifth place finish for Kim Renicks (-48kg) and seventh place finishes for Eric Ham (-73kg) and Jamal Petgrave (-90kg).

This was Renicks’s third fifth place finish at Grand Prix in the last year and she showed good form on the first day of the event including a win over World No.11 Melania Clement (FRA) in the quarter-final.

Renicks made the stronger start as she forced Menezes to pick up two shidos but the Brazilian showed her class to win the contest with two quick-fire waza-ari scores.

Glossop’s Ham displayed some good judo throughout the day with strong wins over Michal Bartusik (POL) and Roudolf Kourtides (CYP).

The 20 year old lost out to Georgia’s Phridon Gigani in the quarter-finals before losing a close repechage final contest to Georgii Shmakov (RUS).

Petgrave came from behind in his first round contest against Giorgi Gvelesiani (GEO) with two waza-ari scores giving him the win with just under a minute and half left.

He followed that up as he showed good strength and athleticism to hold down Russia’s Alikhan Tcechoev for ippon.

Ciril Grossklaus (SUI) was too strong in the quarter-finals before a later waza-ari score to Piotr Kuczera (POL) in the repechage final meant Petgrave finished outside the medals.

Adam Hoshal (-81kg) and Frazer Chamberlain (-90kg) both went out in the round of 16 losing close contests to Anri Egutidze (POR) and Ibrahim Keita (FRA) respectively.

Dan Grade Promotions – March 2018 Scroll to top
Select the fields to be shown. Others will be hidden. Drag and drop to rearrange the order.
Click outside to hide the compare bar
Compare