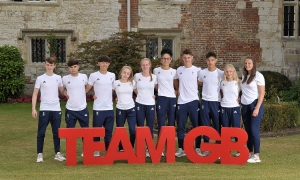 Today saw the start of the judo programme at the European Youth Olympic Festival (EYOF) in Baku.

Mae Bostock (-48kg) was the stand out performer on day 1. Drawn in Pool D, Bostock had a bye in the opening round before facing Zuleima Del Carmen Falcon-Sanchez (ESP) in the second round. A waza-ari score was enough to see Bostock progress to the quarter-final against European number 7, Ana Viktorija Puljiz (CRO). The Croatian’s experience showed as she defeated Bostock to win the Pool and Bostock was progressed to the Repechage, with the Croatian later going on to win gold.

Bostock faced Diana Gagoshidze-Filkina (GEO), ranked over 100 places ahead of Bostock in the European rankings. The match was much closer than the rankings suggested but it was the Georgian that prevailed, winning by an ippon score. The result saw Bostock finish in 9th place.

Artur Patemian (-55kg) defeated Guga Amirkhanasvili (GEO) in just 20 seconds, in the opening round, to set up a second-round match against European leader and European Cadet Championship gold medallist, Vincenzo Skenderi (ITA). Despite the 85 European ranking places between the two players, the match entered final score where the Italian eventually progressed by an ippon score.

Douglas Fleming (-50kg) was defeated by European number 5 Thomas Scatolino (ITA) in the opening round.

Harry Zain-Prosser (-60kg) was defeated by Balint Marosi (HUN) in the opening round.

Day 2: European Youth Olympic Festival Scroll to top
Select the fields to be shown. Others will be hidden. Drag and drop to rearrange the order.
Click outside to hide the compare bar
Compare