You are here: Home / Events / Dan Powell Wins Bronze At U23 Europeans 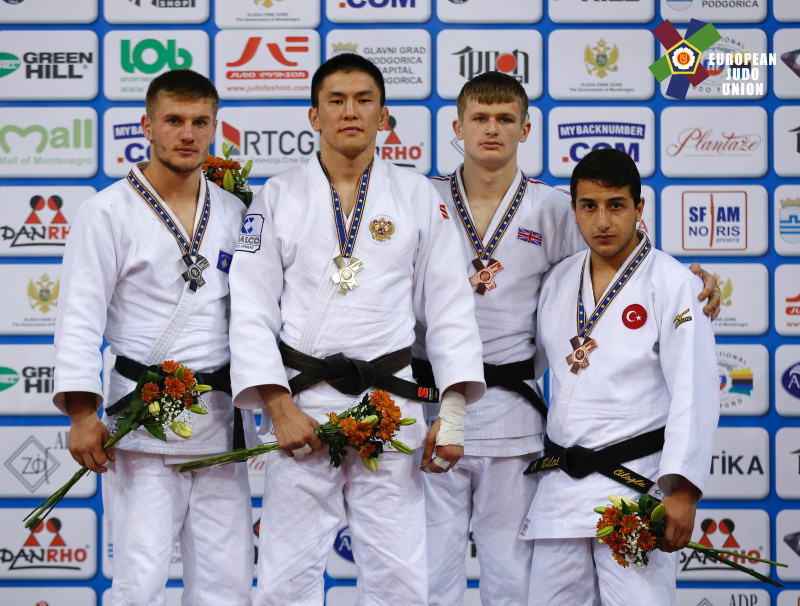 Dan Powell secured the biggest medal of his career to date as he won -73kg bronze at the 2017 U23 European Championships in Montenegro on Saturday 11 November.

The West Midlands judoka made a solid start against Turkey’s Murat Bektas going ahead early on by waza-ari. Powell finished the contest on the ground as he showed good strength to secure osaekomi for ippon.

Austria’s Lukas Reiter was next up in the round of 16 and Powell took the initiative early on with a waza-ari score after the opening exchange. Powell doubled that lead at around the half way mark with a determined attack.

From there the British fighter showed excellence contest management skills to hold off Reiter and move into the quarter-finals.

Russia’s Saian Ondar was next up and he put in a strong attack early to take the lead by waza-ari. Powell went on the attack but he was countered by Ondar as the Russian doubled his lead.

Despite his best efforts Powell wasn’t able to trouble the scoreboard and dropped into the repechage.

Artem Khomula (UKR) was a former Junior European Championship and Grand Prix medallist but Powell dominated from the start. An early waza-ari put him in control and he added to that score as he countered off the back of a period of pressure from Khomula.

In the final minute Powell threw Khomula for a third waza-ari and followed up on the ground to secure osaekomi. The Ukrainian tapped as he realised there was no chance to getting out of the hold.

Moldova’s Cornel Andries would be Powell’s opponent for bronze in Podgorica and the British judoka went in with a 2-0 record in his favour.

He looked likely to make it 3-0 as he finished the first minute a waza-ari up, having dominated from the start.

Andries came back well though as he countered Powell for waza-ari. Both judoka were looking strong in attack in an exciting contest as Powell retook the lead with little over 90 seconds with a lovely, determined attack.

Andries presses hard for the final minute but Powell did enough to hold him off and take his place on the medal rostrum.

“I think there were many reasons behind my success today. Partly a good performance on the day, but also mentally preparing before every fight gave me a good insight into how I was going to win, which is something I have struggled with in the past.

“Performing at this level has given me real confidence going forward into seniors.

“I can only thank family, friends, coaches, training partners and support staff as without them this result would not have been achievable.”

“I thought his performance was his best to date, it had everything: eight tachiwaza scores, two ippon wins in newaza, great kumikata skills and all delivered with excellent composure and decision making – the full compliment of  ‘the Trademarks’.

“Delivering a performance like that is impressive at anytime, but doing it at a Championships is even more so. Dan should take great pride and confidence from today.

“Dan has vast potential and I think his performance and result today will be a springboard for future success.”

Ham went behind early on against Andries after a big throw in the opening minute. The Moldovan took a second waza-ari with two minutes to go and he was too strong in the closing stages as Ham looked for the win.

Hayes came through a tough opening contest with home judoka Novo Raicevic (MNE) as the Montenegro judoka received hansoku-make for three shidos after continuous negative judo. This was despite being ahead by three waza-ari.

Hayes then took on Moldova’s Dorin Gotonoaga with the eventual gold medallist given a very tough match by the British judoka.

Hayes took the lead in the opening thirty seconds but could not hold onto the lead with the Moldovan showing his quality to score two waza-ari in quick succession.

That proved to be enough with Hayes exiting in the round of 16.

Tomorrow will be the turn of Emma Reid at -78kg. Competition starts at 1000 UK time with a live stream via britishjudo.org.uk and updates via @BritishJudo on Twitter

First round exit for Reid at U23 Europeans Scroll to top
Select the fields to be shown. Others will be hidden. Drag and drop to rearrange the order.
Click outside to hide the compare bar
Compare