You are here: Home / Events / Conway wins first Grand Prix since 2015 at The Hague 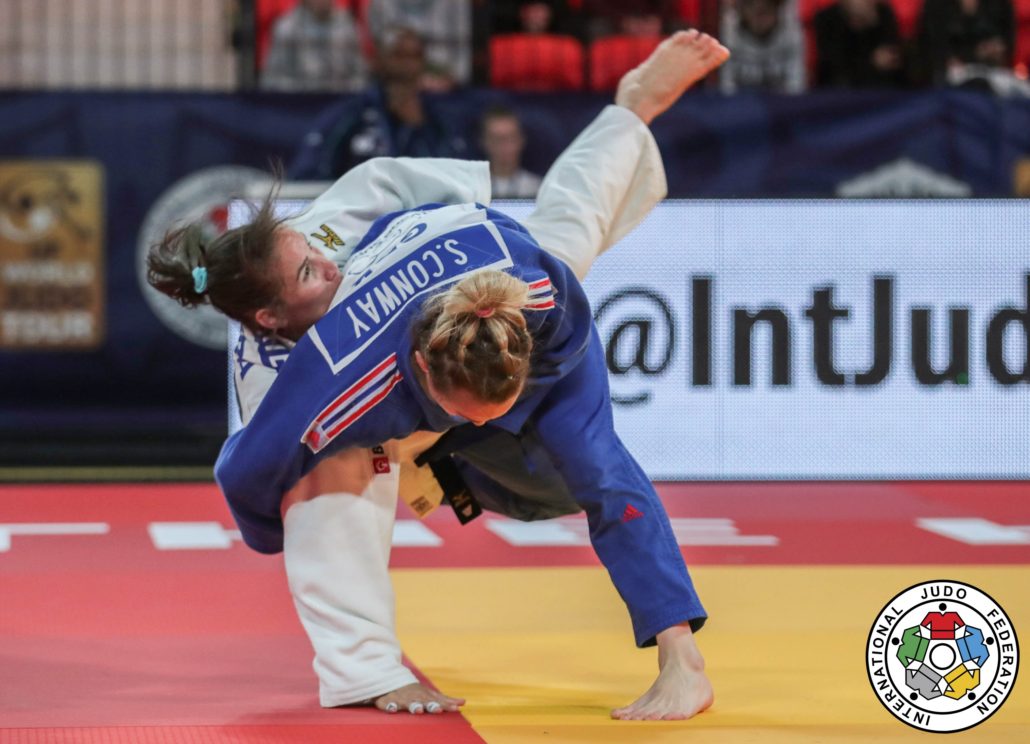 GB Judo finished day two of the 2018 The Hague Grand Prix with three medals including -70kg gold for Sally Conway on Saturday 17 November.

This was Conway’s sixth medal of 2018 and also her first Grand Prix gold in almost three years.

The Rio 2016 bronze medallist was in world-class form from the start. After a bye into the second round Conway’s world-class newaza skills came to the fore against Melissa Heleine (FRA).

Conway executed a turnover on the ground and secured osaekomi. From there she was in a position to also apply the armlock and force the French fighter to tap.

Her newaza proved decisive in the quarter-final against Gabriela Willems (BEL) as she forced the Belgian judoka to ground.

From there she worked into a hold down and held Willems for the full twenty seconds, giving her the ippon win.

WRL 3 Maria Portela (BRA) was next up in the semi-finals and unsurprisingly it was a very tight with neither fighter really able to gain an advantage.

Going into the final seconds Conway was down by two shidos to one and the contest looked like it was set for golden score.

The British fighter didn’t stop looking for the score though and threw Portela for ippon with a strong Makikomi.

She was due to face Sanne Van Dijke (NED) in the final but the Dutch judoka, whom Conway has beaten in every contest to date, was unable to fight due to injury. 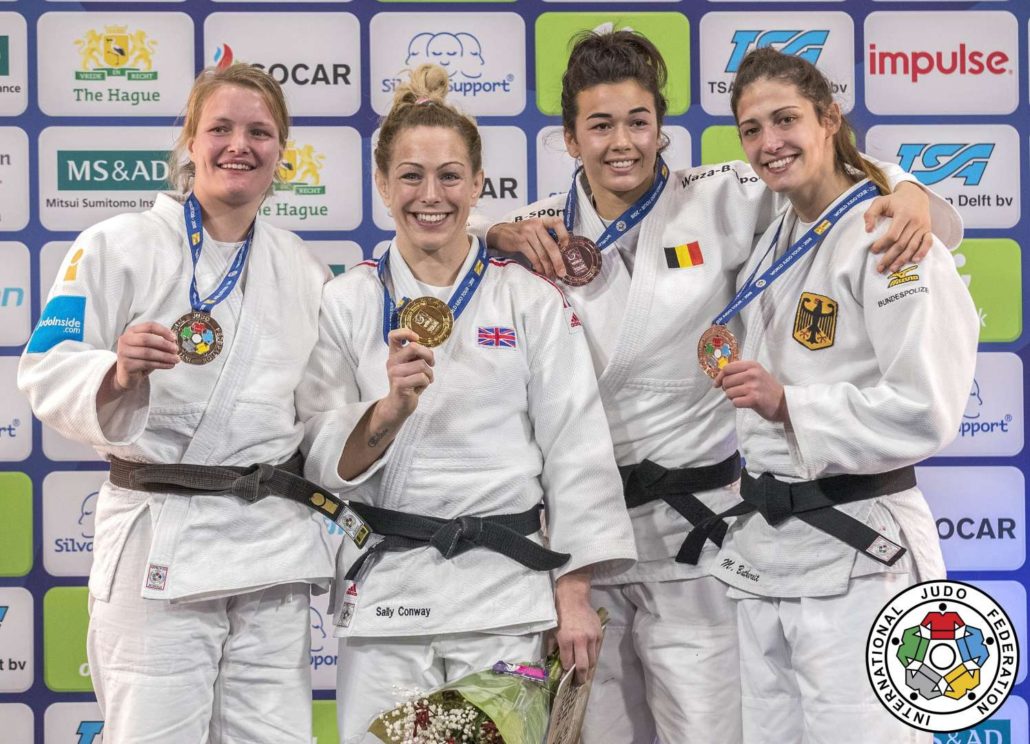 There was double British representation on the -63kg medal rostrum as Alice Schlesinger won silver and Amy Livesey finished with bronze.

Schlesinger’s silver was her first of 2018 and her first since medalling this event in 2017. She made short work of her first opponent, as she showed great transition skills to apply juji-gatame and force Yanka Pascoalino (BRA).

She then faced teammate Livesey in the quarter-final. The more experienced judoka was too good in the end, throwing Livesey for ippon with uchi-mate.

She then had to grind out her semi-final against France’s Maelle Di Cintio. Schlesinger made a strong start and frequently had her opponent under pressure in tachiwaza exchanges.

However, Schlesinger appeared to injure her thumb during the fight and had to dig deep as the French judoka came back.

The contest went into golden score and with just over a minute of added time on the board Schlesinger stayed strong as Di Cintio attacked and countered her for waza-ari.

China’s Yang Junxia had been in great form all day and she brought that to the final. She attacked Schlesinger hard in newaza and her persistence told as she secured a hold down in the final minute to win the contest.

Livesey had started her day with a good win Israel’s Inbal Shemesh as the British fighter threw her opponent for waza-ari in the final minute with a quick uchi-mata.

Her second round against Nadia Simeoli (ITA) was a much quicker affair as she spotted an opportunity to apply shime-waza in the opening minute.

The St Helens judoka recovered well from her quarter-final defeat to grind out a win in the repechage final against Mongolia’s WRL 11 Mungunchimeg Baldorj.

The Mongolian was also a World bronze medallist from 2017 but Livesey’s greater attack rate in golden score told with Baldorj picking up a third shido. 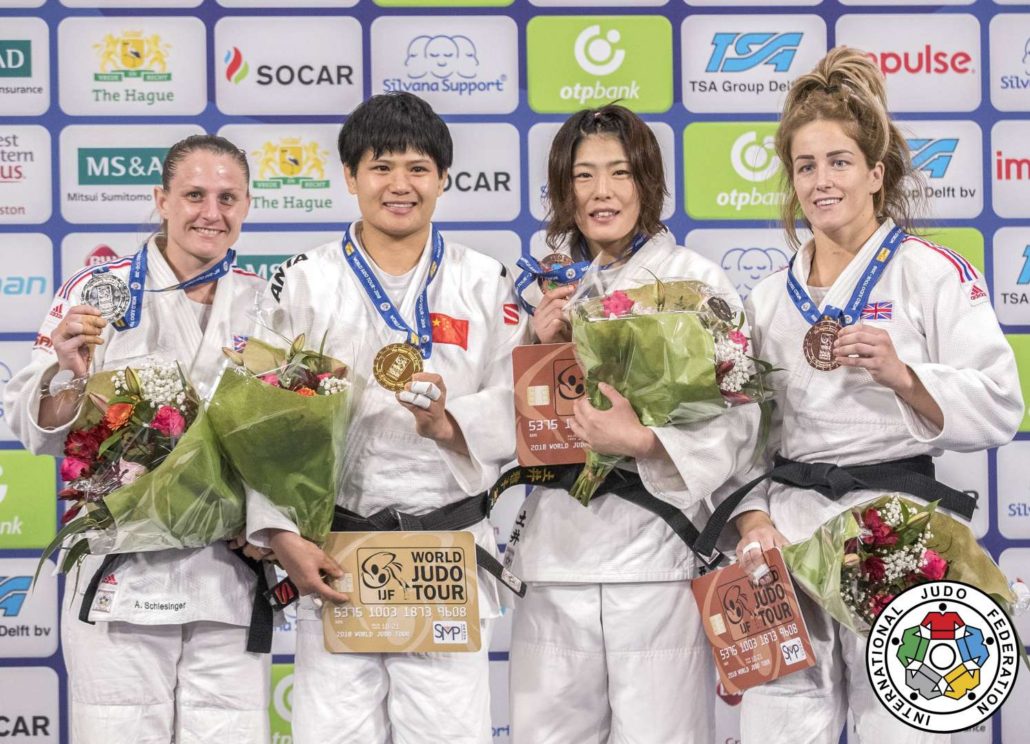 Danny Williams lost out in the first round of -73kg to Germany’s Schamil Dzavbatyrov. Williams made a solid start and forced the German judoka into getting two shidos.

However, Dzavbatyrov went ahead by waza-ari as he countered an attack by the British judoka.

Williams continued to press but the German spotted an opportunity in the final minute to finish the contest with some ashi-waza.

Competition starts at 1000 UK time with live stream via live.ijf.org. Follow @BritishJudo on Twitter for live updates throughout the day

Silverware in Dakar and seventh place finishes at The Hague Scroll to top
Select the fields to be shown. Others will be hidden. Drag and drop to rearrange the order.
Click outside to hide the compare bar
Compare