You are here: Home / Events / Close defeat for GB Judo in World Teams 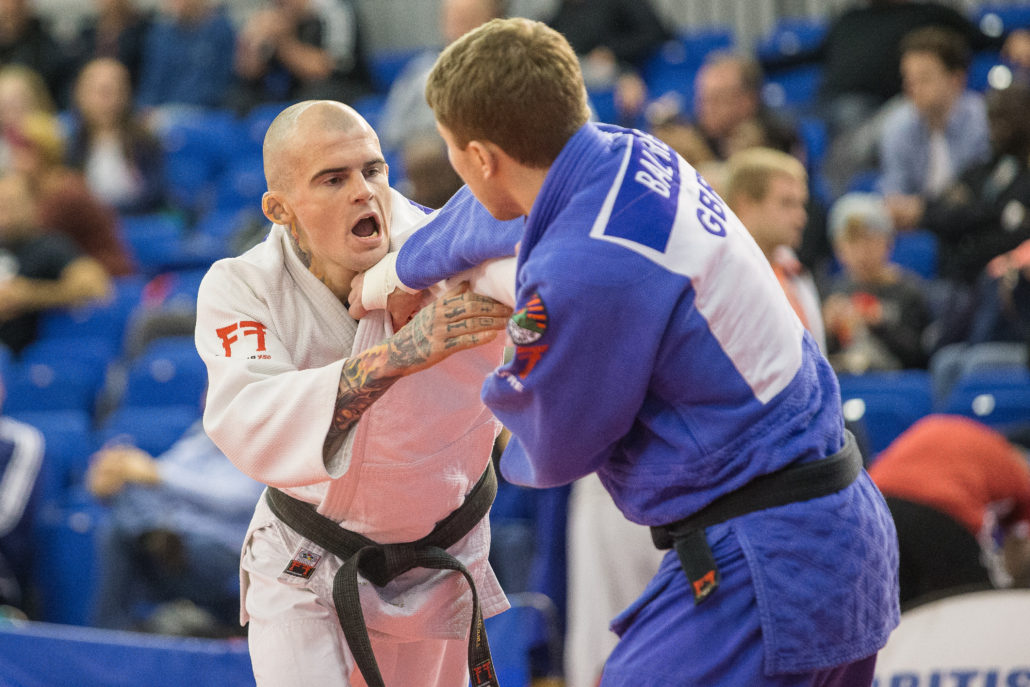 GB Judo went out in the second round of the 2018 World Team Judo Championships to Russia in a very hard-fought match on Thursday 27 September.

GB had a bye into the second round and Russia put out a strong team for the match.

-70kg contest started the match as Sally Conway came out all guns blazing against Alena Prokopenko.

The Russian had caused Conway some issues in their last contest at the Budapest Grand Prix in August but the British judoka was too good this time, throwing Prokopenko for ippon with a minute forty on the clock.

Max Stewart was next up against WRL 13 Khusan Khalmurzaev and the British judoka more than held his own against his higher-ranked opponent.

Stewart started well in a contest that was dominated by lengthy kumikata exchanges.

Both fighters picked up an early shido for passivity with Stewart picking up a second with just over a minute left in the contest.

Stewart continued to press but the Russian was happy to defend, knowing that he had an extra shido to play with.

Eventually in golden score this led to another shido for both men, meaning Stewart lost out a close contest.

This brought the score to 1 – 1 and Russia took control in the two heavyweight contests at +70kg and +90kg.

Natalie Powell took on Kseniia Chibisova and the Russian had distinct height and weight advantage.

Chibisova used it to good effect as she consistently forced Powell to ground. The Russian never looked like attacking but was doing enough for the referee who soon awarded Powell with three shidos.

Enfield judoka Wes Greenidge was making his first appearance at a Senior World Judo Championships and he gave his all against last year’s Junior World Champion.

The Russian, who has already medalled at Grand Prix level, was just too good on the day as he forced Greenidge into picking up three shidos.

This meant it was 3 – 1 to Russia and Nekoda Smythe-Davis would need to beat Anastasiia Konkina at -57kg to keep GB in the match.

The Russian had won their last encounter and it was an exciting contest to watch.

Konkina went ahead by waza-ari with just 41 seconds left but Smythe-Davis came flying back levelled things up in the last 20 seconds to take the contest into golden score.

The British fighter continued to press and after 50 seconds of golden score she threw Konkina for a second waza-ari with uchi-mata.

This meant that, with the scores at 3 – 2, a win for Danny Williams at -73kg would take the contest to a golden score fight off.

Williams was up against 2015 World Masters winner Denis Iartcev and the Camberley judoka gave an outstanding performance.

The British fighter did all of the attacking in the opening minutes but was unable to force a shido on the Russian fighter.

In the end it was Williams that got a shido for stepping out of the area and the contest went into golden score.

A second shido came early in golden score as the British judoka was penalised for a false attack.

In the next exchange Williams went for the sacrifice technique but got caught in the hold down by Iartcev who held on long enough to get the waza-ari score.

This meant that Russia took the contest 4 – 2 and GB Judo exited in the second round.

An understandably emotional Danny Williams was proud of his efforts today:

“I’m very proud of myself and very proud of the whole team. If you consider Russia are probably one of the biggest powerhouses in the world, we, Great Britain, were right up there with them, every inch of the way.

“Obviously it’s disappointing for us, coming off and we’re disappointed for everyone that’s back home watching but I don’t think it could have got a lot closer to be honest.”

That result brought the curtain down on GB Judo’s 2018 World Judo Championships campaign.

GB Judo have medalled for the second year running at a World Judo Championships with Nekoda Smythe-Davis’s silver.

There were also outstanding fifth place finishes for Jemima Yeats-Brown (on debut) and Sarah Adlington.

Both judoka also beat players ranked inside the WRL Top 10 to make it to the medal fights.

Sally Conway placed at her first World Judo Championships since 2009 when she finished seventh while Chelsie Giles and Stuart McWatt made strong impressions on their debuts.

Keep an eye out on British Judo’s social media accounts over the next week for post-Worlds content and we look forward to seeing you in Glasgow for the European Open next month (6 – 7 October).

Talking about Parents in Sport Week Scroll to top
Select the fields to be shown. Others will be hidden. Drag and drop to rearrange the order.
Click outside to hide the compare bar
Compare
Wishlist 0
Open wishlist page Continue shopping