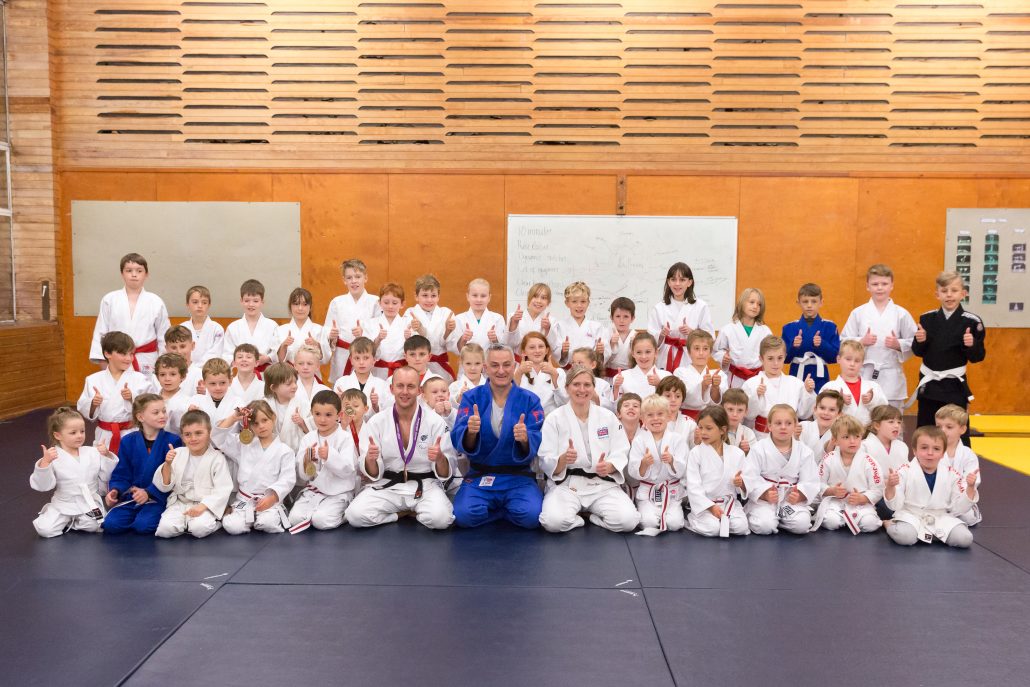 Many thanks to Dave Dunsford for the below write-up

On Tuesday 17th October Knaresborough Judo Club which are based in King James school, Knaresborough were treated to a very special visit. Ben Quilter, VI Judo double World champion and European champion and bronze medallist at the 2012 Paralympics had fun teaching over 50 children from Knaresborough.

He shared his amazing Journey with all the children and the parents asked questions and were inspired by his honest answers.

The club train at King James School and the head teacher was very keen to attend the evening,

“It was a real pleasure to be invited to Knaresborough Judo Club and meet Ben Quilter, Paralympic World Champion and the young judo enthusiasts.  The school is proud to be part of the Knaresborough Community and it is fantastic to see such great participation from a young and vibrant membership of the judo club.  Ben was a credit to the sport as he warmed up and joined in with the training.”

Ben came along to Knaresborough JC to teach the Under-8s and Over-8s lesson. The children’s faces told a million stories of excitement and amazement at how good he was at judo even though he’s visually impaired!

They were treated to seeing and feeling the World and European medals he’d won. Most popular was holding the amazing 2012 Paralympic medal and they were intrigued how it was made with braille around the edge. Ben explained why this was a special language for people who are visually impaired.

He was given gifts and flowers to thank him which were from the local tea shop in the main Knaresborough Town Square to remind him of our lovely town. The children laughed most when he was given some doggy treats for his British bulldog.

The parents who all stayed and watched (parents are encouraged to stay and watch their youngsters all the time) asked some very serious questions which were dealt with in the most humble way possible.

Ben said he felt ‘Lucky’ to be able to compete at judo and even though at the age of 12 starting to realise he was slowly losing his sight he was grateful for the chance to see up to that point! The parents and children were in the presence of a very special young man indeed.

Coaches Dave and Louise Dunsford who teach at the club said:

“We were so lucky to have Ben visit and he has made a huge impact on the children, the parents here and us”

Dave and Louise Dunsford, black belts, both teach at the club every tuesday (in school term) from 6-9pm teaching under 8s, over 8s and seniors (16 years above)

GB Judo Preview: 2017 Abu Dhabi Grand Slam Scroll to top
Select the fields to be shown. Others will be hidden. Drag and drop to rearrange the order.
Click outside to hide the compare bar
Compare