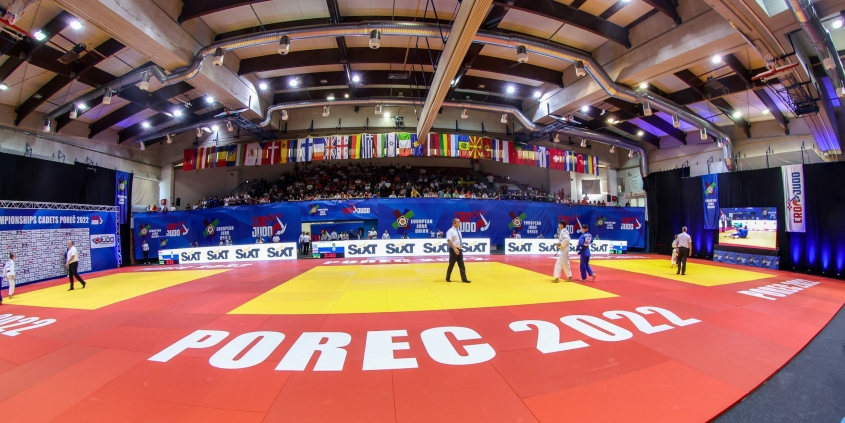 The pick of today’s judoka was Charlie Ayre who finished 7th, narrowly missing out on the bronze medal contest.

Defeat to Nazar Viskov (UKR) followed in the next round for Ayre but he was given a second chance by way of the Repechage. Victories against Luka Suvajac (BIH) and Simas Polikevicius (LTU) set up a contest against Francesco Sampino (ITA) for a place in the bronze medal contest. Ayre conceded a waza-ari score at the midway point of the contest before being caught and thrown for ippon score.

Defeat meant Ayre had to settle for 7th place, but the young judoka gave a great account of himself on the mat today.

In the -44kg category, Emma McCabe faced a tough opening round contest against 2nd seed Morgane Annis (FRA). Annis flew out of the blocks throwing McCabe for ippon score in the opening 15-seconds. It initially looked as though the referee had called matte prior to the score, but, unfortunately for McCabe, upon review, the score was awarded and Annis progressed to the next round.

McCabe re-entered the competition in the Repechage but was defeated by Zeynep Betul Sarikaya (TUR) in the Round Two contest.

In the -50kg category, following an opening-round bye, Laurence Hill faced number one seed Sebestyen Kollar (HUN). Hill got caught on the ground and Kollar pinned the Welsh judoka for ippon score.

There was a reprise for Hill as Kollar won the Pool, meaning Hill re-entered the competition in the Repechage. Hill was defeated in his Round Two contest against Gor Safaryan (ARM).

Ross McWatt (-55kg) was narrowly defeated in his opening round contest against 8th seed Roy Rubinstein (ISR). With two shidos to his name, and the contest entering the final 20 seconds, Rubinstein registered a waza-ari score to win the contest. Unfortunately for McWatt, Rubinstein lost his Round 2 contest, meaning there was no way back into the competition through the Repechage.

Tomorrow is the busiest day for GB Judo at the Championships as 9 judoka are in action in Porec.

Preliminary round action will start at 08:00 am (BST) on Friday with Final Block scheduled to commence at 16:00 (BST).

You can watch all the action from the European Judo Cadet Championships LIVE on the British Judo Competition Hub page.

Paris Olympic Qualification to get underway in Mongolia

14 Judoka selected for Team England at Birmingham 2022 Commonwealth Games Scroll to top
Select the fields to be shown. Others will be hidden. Drag and drop to rearrange the order.
Click outside to hide the compare bar
Compare