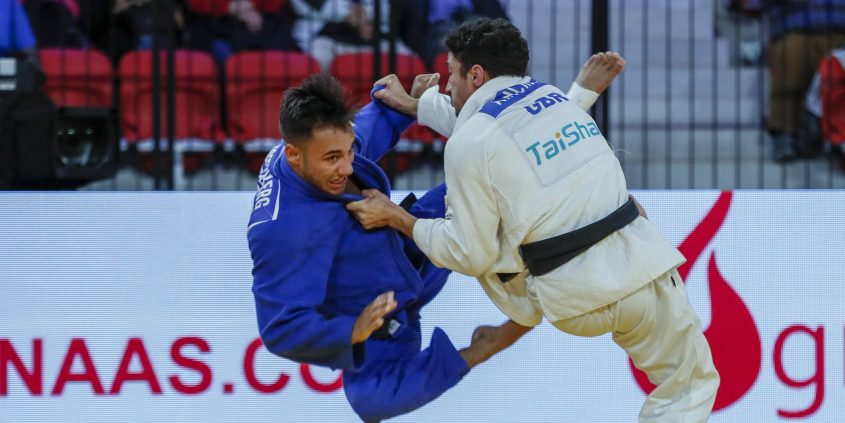 Ashley McKenzie claimed a silver medal on the first day of competition at The Hague Grand Prix in the Netherlands.

Ashley McKenzie (-60kg) was in imperious form throughout the morning session as he brushed aside his opponents in his opening two contests. Following a bye into the second round, he came up against Poland’s Bartlomiej Garbacik in the second round. He was able to score with an early waza-ari to settle any nerves beforehand. He demonstrated good contest management to see out the contest to set up a quarter final against home judoka Roy Koffijberg. McKenzie made easy work of the 21 year old as he registered four waza-ari scores on his way to the semi finals.

It was a tense semi final for McKenzie as he came up against Spain’s World No.5 Francisco Garrigos. The contest went all the way to Golden Score and it was the Brit celebrating as he managed to score a waza-ari with 30 seconds on the clock to secure his place in the Final.

It was a high class Gold Medal contest between McKenzie and Bekir Ozlu from Turkey. The pair had met three times previously with the Turkish judoka having a 2-1 winning record against the Brit. The contest could have gone either way with Ozlu possessing a height advantage, but McKenzie showed his speed throughout. It wasn’t until the third minute that the ippon finish came from Ozlu as he feinted direction with McKenzie one way, before following through in the opposite direction to score via ura-nage.

Kimberley Renicks just fell short in the bronze medal contest in the -48kg category as she was made to settle for fifth place. Taciana Cesar from Guinea-Bissau stood in her way of a podium finish and the fight went right the way to Golden Score with neither judoka able to find the score needed to win the medal. It was Cesar though that got the win after she caught Renicks with Ouchi-gari to register the score and with it, the bronze medal.

Kimberley Renicks put in an efficient performance in the opening round as she progressed past Germany’s Mira Ulrich. She was strong throughout as she controlled the grip in the vital exchanges but couldn’t find the score. It wasn’t until the clock ticked down to 0:01 that Renicks was able to register a waza-ari score just before the clock expired. Mongolia’s World No.2 Otgontsetseg Galbadrakh awaited Renicks in the Quarter Finals and this proved too much for Renicks. Galbadrakh looked to score on every exchange but Renicks displayed good defence and defiance to keep the Mongolian at bay until the half way stage. Galbadrakh threw Renicks for waza-ari before making the transition into newaza to secure the win.

It was an impressive victory in the repechage for Renicks though as she defeated Portugal’s World No.25 Joana Diogo following a waza-ari score around the half way stage of the contest. The Portugese judoka looked to increase the pace of the contest as it wore on but it was Renicks who progressed to the bronze medal contest.

Earlier in the day, Chelsie Giles was eliminated in the repechage of the -52kg category. She began the day in impressive fashion with an ippon victory over American Maria Dhami. Giles put Dhami under pressure at numerous times throughout the contest but could not find the winning combination. Eventually with one minute left on the clock, Giles was able to hook Dhami’s ankles to register the ippon victory. In the quarter finals, she came up against Polish Agat Perenc. It was a frantic opening 30 seconds to the contest but that seemed to take it’s toll on both fighters as the contest wore on. It was the Pole who was able to score two waza-aris during the final minute to secure the win and drop Giles down into the repechage.

A tough match up against Mongolia’s Uransetseg Munkhbat who has recently made the step up from -48kg, where she is the World No.1 The experienced Munkhbat proved too much for Giles as she used her experience to work her around before eventually forcing her to submit.

Sam Hall, Kelly Staddon and Bekky Livesey suffered disappointing opening round defeats in the -60kg, -48kg and -57kg category respectively. Kelly Staddon was drawn against Belgium’s Anne Sophie Jura, an opponent she has previously lost to in Madrid back in 2016. The result followed a similar pattern as Staddon came flying out of the blocks and forced her opponent to pick up two shidos but Jura was able to score a single waza-ari and made the effective transition into newaza to secure the ippon victory.

Sam Hall came up again Mongolia’s Amartuvshin Bayaraa in the -60kg opening round. It was a contest that flew by but neither judoka could find a score. Exactly one minute into Golden Score it was the Mongolian who worked Hall onto his shoulders to secure the win.

Bekky Livesey took on home judoka Shannon Van de Meeberg in -57kg, but the British World No.43 could not find an answer to her young opponents early score. Livesey’s grip was broken on numerous occasions so she struggled to find a scoring move and eventually lost the contest via a single waza-ari.

Alice Schlesinger Wins The Hague Grand Prix Silver Medal Scroll to top
Select the fields to be shown. Others will be hidden. Drag and drop to rearrange the order.
Click outside to hide the compare bar
Compare