You are here: Home / Featured / 5th for Howell and Petersen-Pollard on Day 2 of Hungary Grand Slam 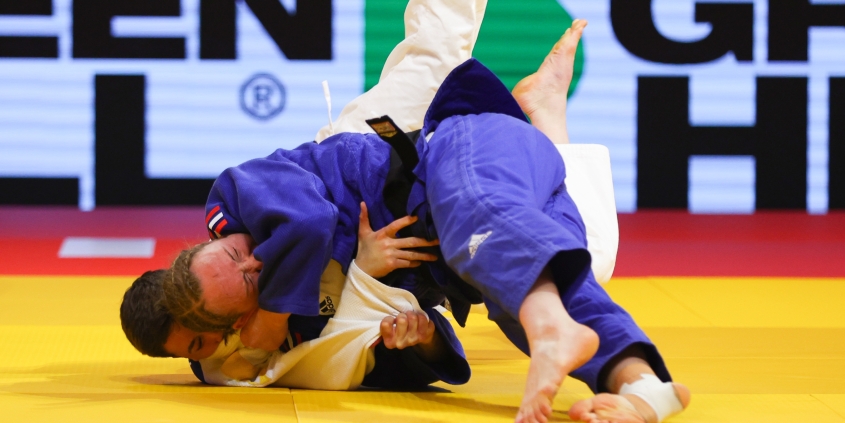 On the second day of the Hungary Grand Slam in Budapest, Gemma Howell and Kelly Petersen Pollard both finished 5th in the -63kg and -70kg categories respectively.

Drawn in Pool A, Howell defeated Lia Ludvik (SLO) in the opening round following some great newaza. A mammoth Round 2 victory against 8th seed Renata Zachova (CZE) followed before she booked her place in the Semi-Final following victory against top seed Anriquelia Barrios (VEN) – both victories coming courtesy of Zachova and Barrios amassing three penalty shidos.

A Semi-Final defeat to Megumi Horikawa (JPN) followed – Howell getting caught in newaza and conceding the contest saw her progress to the bronze medal contest to face Maylin Del Toro Caravjal (CUB).

In the -70kg category, entering as 4th seed, Petersen-Pollard defeated Laerke Olsen (DEN) – in the 12thminute of the contest Olsen picked up a third penalty shido.

Petersen-Pollard registered a waza-ari score at the midway point of the contest and the young Brit held on to book her place in the bronze medal contest to face current World Champion Barbara Matic (CRO).

The experience of Matic showed in the bronze medal contest as she dominated the contest and the grips. This resulted in Petersen-Pollard picking up a third shido as the contest reached the 4-minute mark.

Elsewhere, Dan Powell (-73kg) was defeated in his Round 2 contest against Michail Tsoutasvili (GRE), a waza-ari score for the Greek fighter in Golden Score enough to progress. Powell had an opening-round bye earlier in the competition.

Tomorrow is the third and final day of the Hungary Grand Slam and we will see Emma Reid and Natalie Powell in action in the -78kg category, whilst for the men, Jamal Petgrave (-90kg) and Rhys Thompson (-100kg) will be in action.

You can watch all the action from the Hungary Grand Slam LIVE on the British Judo Competition Hub page each day.

Reid takes 5th in the final day of Hungary Grand Slam Scroll to top
Select the fields to be shown. Others will be hidden. Drag and drop to rearrange the order.
Click outside to hide the compare bar
Compare