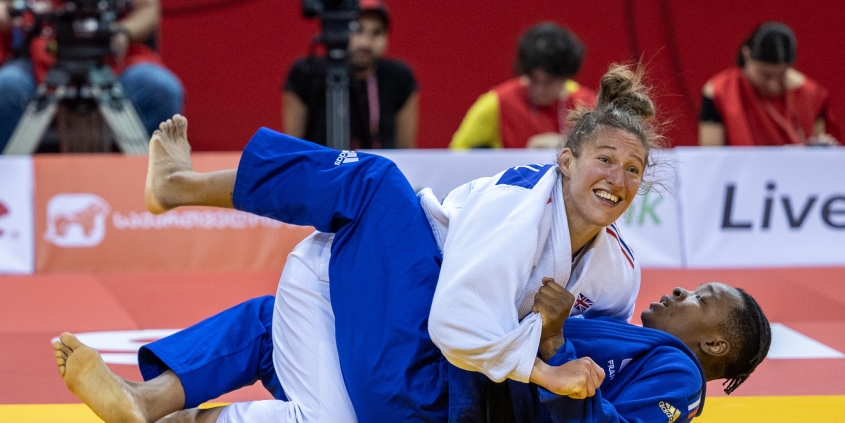 This weekend we see 13 GB Judoka fight in Budapest at the Hungary Grand Slam. The competition will be the second event in the Paris 2024 Olympic qualification window following the Ulaanbaatar Grand Slam last month.

Not only will Hungary stage judoka vying for Paris Olympic qualification points, it will also play host to a number of judoka who will compete at the upcoming Birmingham Commonwealth Games.

Five GB Judoka will be fighting on the opening day. 2022 European Champion and Olympic bronze medallist Chelsie Giles will open her Paris Olympic qualification account. The -52kg category will see the current top 3 in the world in action. Seeded 3rd, Giles has a round one bye in pool c.

Two fighters heading to the Commonwealth Games are Acelya Toprak and Lele Nairne who will fight in the -57kg category. Toprak will face Mongolian Judoka Ichinkhorloo Munkhtsedev whilst Nairne will face Qianxi Lin from China.

In the -60kg category Dylan Munro will be in action. Scotland’s Munro will face Georgian Temur Nozadze in Pool D.

Welsh Judoka Gregg Varey who recently made his European debut in Sofia will face Patryk Wawrzyczek from Poland in the opening round of the -66kg category.

European Champion Gemma Howell will be in action on day two in the -63kg category. Competing for the first time since that magical day in Sofia, Howell will face Slovenian judoka Lia Ludvik.

The men’s -73kg category will see Daniel Powell in action. Powell recently competed at the Ulaanbaatar Grand Slam and will face Michail Tsoutlasvili from Greece in Pool A. Another judoka who fought in Mongolia was Lachlan Moorhead in the -81kg category. Moorhead was Abu Dhabi Grand Slam bronze medallist last year and will face Georgian judoka Giorgi Sherazadishvili in the opening round in Hungary.

The final day of the competition will see four GB judoka fighting for a place on the podium. All five fighters in action will also be representing the home nations at the Birmingham ‘22 Commonwealth Games in August.

Natalie Powell, who was bronze medallist at the Tbilisi Grand Slam in June joins 8th seed Emma Reid in the -78kg category.

Reid will face Italian Judoka Giorgia Stangherlin whilst Powell will fight Eiraima Silvestre from the Dominican Republic in the opening round.

You can watch all the action from the Hungary Grand Slam LIVE on the British Judo Competition Hub page each day.

NAIRNE CLAIMS 7TH ON OPENING DAY OF HUNGARY GRAND SLAM Scroll to top
Select the fields to be shown. Others will be hidden. Drag and drop to rearrange the order.
Click outside to hide the compare bar
Compare